Last weekend I had a birthday.

This in itself wasn’t a surprise. My birthday, like that of most people, happens every year around pretty much the same time.

No, what surprised me—in an amazed and delighted way—was the variety of sweets involved. And my threshold for being surprised by sweets is pretty high, being descended as I am from a father who invented his own praline recipe and a grandfather who liked to consume four cookies with his midmorning coffee each day.

Here, take a look at the weekend’s bounty: 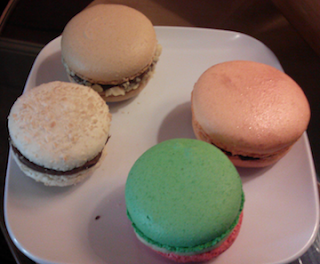 A friend and I escaped our kids for an afternoon and sampled these French macarons, made with almond flour and filled with ganache. The flavors, clockwise from top, are chocolate hazelnut (like Nutella, but handmade), chocolate orange, cherry lime, and coconut caramel. Being a fan of coconut, this last one was my favorite. That buttery dark caramel was one of the best things I’ve ever tasted. 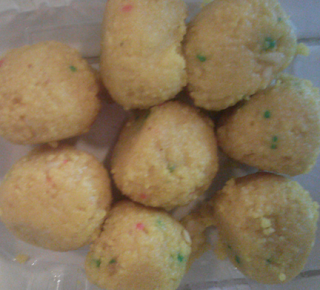 These are Indian ladoo, made with besan (chickpea flour) and sugar syrup. Sort of like candied hush puppies, if you can imagine such a magical thing. Mr. R and I had a group of friends over last weekend, and several people who had never tried ladoo got to taste it for the first time. 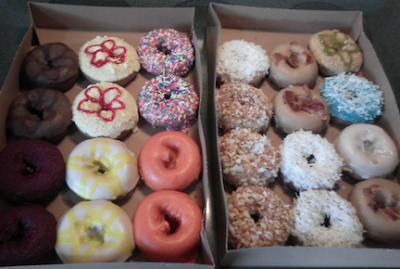 You guys know what these are. We had these around when our friends were over, and what didn’t get eaten that evening was sent home with them as “party favors.”

Everything was delicious—and everything was shared with some of my favorite people in the world. That, more than any dessert, was the sweetest part of all.

What’s your favorite way to celebrate your birthday? And which would you choose out of the treats above?

Historical romance author Theresa Romain pursued an impractical education that allowed her to read everything she could get her hands on. She then worked for universities and libraries, where she got to read even more. Eventually she started writing, too. She lives with her family in the Midwest, where she is working on her next book. On September 3, she’ll begin a new historical romance trilogy with IT TAKES TWO TO TANGLE.