By Gina Lamm January 28, 2013
When I was six years old, I was DETERMINED to be a magician. I had an old silk bathrobe of my grandmother's. It had a tied-on belt. I used that as my cape, and I'd swoosh around the house in my sea-foam-green disguise as I performed "magic tricks" for my family. These tricks were almost always making stuff disappear. Usually marshmallows.

When I was about ten, my mom told me I should become a massage therapist. I'm pretty sure she just told me that so I'd practice on her. She's sort of sneaky, my mom.

When I was a teenager, I didn't really want to do anything but theatre. Oh, and fall in love and get married. I was sure I'd probably have to have another job besides acting, but I didn't really think of cultivating a career. My biggest dream was finding a phenomenal guy to sweep me off my feet.

And now, here I am, about to debut my first mainstream romance novel in just under six weeks. Now I can't imagine wanting to be anything other than a full-time novelist. And I'll get there, hopefully! My dream guy is super supportive, and in a crazy way, I'm really glad that I've failed as much as I have in my life.

No really. I mean that.

Every time I've fallen flat on my backside, I've had to re-evaluate things. Discover new ways to live, to work, to create. I've done some incredibly stupid things in my life. Most recently, slicing off a bit of my left index fingertip. Yeah. I know. It was just the skin, and it's growing back, and I've learned that I can definitely type with only nine fingers.

Sometimes things really do work out for the best. I'm super happy to be where I am today, no matter how many screw-ups it took to get here.

In THE GEEK GIRL AND THE SCANDALOUS EARL, if Jamie and her boyfriend hadn't broken up, then Jamie wouldn't have fallen through a bureau mirror and landed with her true love. If she hadn't loved a jerk, she wouldn't understand how incredible her earl really is. If she hadn't risked everything for the man she loved, she wouldn't... 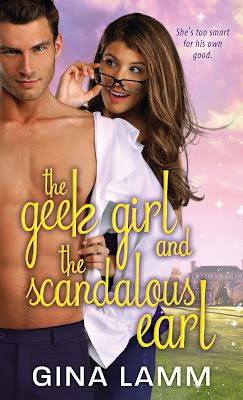 The Stakes Have Never Been Higher...
An avid gamer, Jamie Marten loves to escape into online adventure. But when she falls through an antique mirror into a lavish bedchamber—200 years in the past!—she realizes she may have escaped a little too far.
Micah Axelby, Earl of Dunnington, has just kicked one mistress out of his bed and isn't looking to fill it with another—least of all this sassy, nearly naked woman who claims to be from the future. Yet something about her is undeniably enticing...
Jamie and Micah are worlds apart. He's a peer of the realm. She can barely make rent. He's horse-drawn. She's Wi-Fi. But in the game of love, these two will risk everything to win.

It's great to meet all of you! Feel free to stalk me on the interweb. I don't bite! (well, if you don't like that sort of thing.)