The My Most Memorable Thanksgiving Ever! by Terry Spear 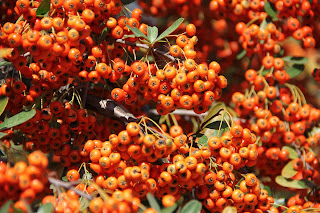 Are you ready for My Most Memorable Thanksgiving Ever? It's not the kind where you say, "Oooh," and "Ahh," and "How very nice and sweet."

Yep, and there it is: My Most Memorable Thanksgiving Ever.

Stories that have no conflict are BORING. Who wants to read about them? Thanksgivings are the same as every Thanksgiving. Feasting, playing, family and friends gathering.  Totally unmemorable from one to the next.

So we had to liven ours up to make it extra special. Wildlife included.

The turkey dinner I shared with my mother and daughter was great. We had a terrific feast while my son was visiting friends elsewhere...but after he heard of OUR Thanksgiving, he said he'd wished he'd stayed home to witness all the excitement. LOL

Feast done, now it was time for the funny Jackie Chan movie, a nice fire, while for the first time since I'd lived in Central Texas, we had sleet and snow and blowing wind for Thanksgiving. It was just perfect.

My daughter put the movie on. I started the 4 1/2--hour burning log. My mother watched.

First, smoke began pouring into the house. All the vents were open!

Then red wasps began pouring into the house!

My daughter is terrified of wasps/bees after being stung by 12 bees at a zoo once--I was the Girl Scout Leader, naturally, and had 10 girls who were stung...and was frantically trying to get the screaming, crying girls into an ice cream enclosed shop.

So she's flipping out, then runs in with hornet spray. I had the vacuum out and was catching the groggy, smoked-out wasps with the vacuum wand. "No, don't spray toward the fire!" I yelled at my daughter.

Who knew what would  happen? I envisioned explosions rocking the house! Besides, we were already gagging on the smoke as it billowed into the house. Hornet spray would have done us in. Especially knowing how much she would have sprayed to kill those suckers!

Mom had grabbed a flyswatter and was swinging at the wasps.

Meanwhile, Jackie Chan is doing his thing on the TV--all in Chinese.

When it looked like I'd gotten the last of the wasps, I started yelling for everyone to open doors, windows, turn on all the ceiling fans. But the 4 1/2 hour burning log, wasn't going to stop burning any time soon! So I was trying to get it into a bucket and out the door, without catching the carpeting on fire as sparks were flying everywhere.

By now, we had a dense gray cloud of smoke that filled half of the space from the ceiling down.

With the fans blowing and the front door and back door open, the icy/snowy wind blew through the the house, carrying much of the smoke with it.

Time to watch the movie. In the freezing cold! All bundled up in coats and sweaters and hats and slippers and blankets, we snuggled on the couch together to watch the funny Jackie Chan movie...in Chinese.

Though, Jenn had restarted it several times as we fought wasps and smoke.

So we watched it in Chinese. Then the outtakes. They are always so hilarious, though we were all still laughing just as much about the wasps and smoke and blizzard weather blowing through the house.

The outtakes were all in English. I looked at Jennifer. She smiled back at me.

So that is My Most Memorable Thanksgiving Ever! And I wouldn't give it up for the world!

I'm going to my son's home for Thanksgiving this year! :)

Just a couple of jaguar pictures. In the first, the jaguar was attacking a piece of wood. 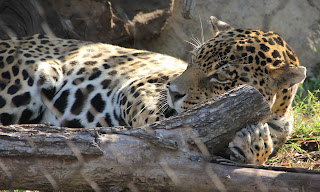 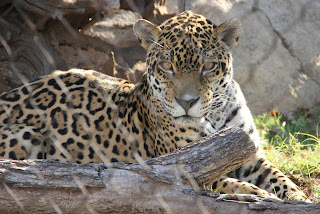 And in the next, he's watching you! I was making a clicking noise with my tongue to get him to look at me for the camera. If you catch one in the wild...do not do this. You want to fade into the background.

If you celebrate Thanksgiving, are you having turkey or something else???

My advice, don't invite red wasps for dinner. Oh, and the smoke? I'd had wind damage to my roof a couple of weeks earlier, took off the ridge of my roof and patches of tiles all over the roof and the cap off my chimney (which they didn't mention), and when they reroofed, the roofers covered the chimney with roofing paper. The heat from the fire was so hot, it did burn a hole through the roofing paper, which, despite how bad the smoke was inside the house, had allowed some of it to escape through the chimney eventually. But I guess they also then sealed in the red wasp nest so they had no where to go but inside with us.

I did get burns on the carpet, and melted the plastic bucket with the burning log. Always be prepared for any natural disaster. Hey, the vacuum cleaner was ready and nearby!