Preview(opens in a new tab)
For a limited time!
Wolf shifter and Navy SEAL veteran Brock isn’t looking to date another she-wolf… until protecting beautiful Natalie brings out the animal in him! From a USA Today bestselling author who writes “striking characters and explosive chemistry” (RT Book Reviews). 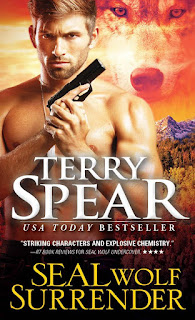 https://www.barnesandnoble.com/w/seal-wolf-surrender-terry-spear/1129309843?ean=9781492677307
https://books.apple.com/us/book/seal-wolf-surrender/id1447278682
For a shifter with no interest in she-wolves...he sure is territorial.
Wolf shifter and former Navy SEAL Brock Greystoke isn’t interested in she-wolves. The last one in his life ambushed him with the intent to kill. So when he’s tasked with helping his cousin’s friend get to a wedding, he has no intention of getting involved with her...
She-wolf Natalie Silverton has inadvertently crossed a group of dangerous criminals, and she’s in dire need of a bodyguard. Good thing Brock is there to protect her. At every turn, their work—and play—brings them closer to catching the criminals and to each other, but Brock will have to get them out of this alive if he has any hope of winning Natalie’s heart.
SEAL Wolf Series:A SEAL in Wolf’s Clothing (Book 1)A SEAL Wolf Christmas (Book 2)SEAL Wolf Hunting (Book 3)SEAL Wolf In Too Deep (Book 4)SEAL Wolf Undercover (Book 5)SEAL Wolf Surrender (Book 6)
What Readers Are Saying About Terry Spear:“Great paranormal romance with depth and dimension.”—Night Owl Reviews for A Billionaire Wolf for Christmas“Excitement and suspense that will keep readers hanging on tight.”—RT Book Reviews for Flight of the White Wolf, 4 Stars“Striking characters and explosive chemistry.”—RT Book Reviews for SEAL Wolf Undercover, 4 Stars

What if you picked up the wrong suitcase at the airport and found something that someone wanted back? Enough to kill for?
Yep, you really have to make sure you check the name tags!