By Terry Spear November 27, 2017
Picture I took of a nutcracker in the German shop at Disney World, one of the table setting for Christmas last year, and the old rocking horse and decorated tree this year. I'm ready. Are you? 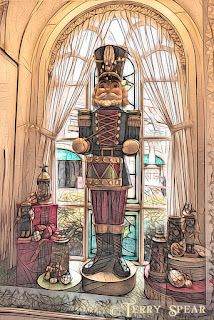 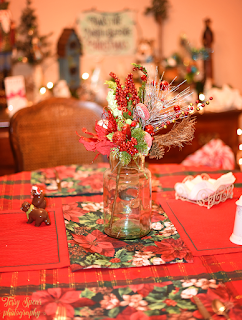 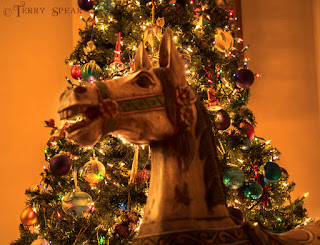 Hope you had a great Thanksgiving!

And if you need a little Christmas:

Excerpt from Dreaming of a White Wolf Christmas

Owen couldn’t believe his luck. Candice Mayfair was the beautiful white wolf he’d seen that day so long ago. Not that she looked like a wolf right now. He only knew she was the wolf, unequivocally, because he recognized her scent. After the initial shock of seeing an unfamiliar and intriguing Arctic she-wolf, he’d gone after her.
The whole pack had gone on a run that night, but they knew to stay far away from any campsite. He and the other guys had swum across the river to explore a bit. Cameron and his mate had stayed on the other side with the kids. He’d even swum back across the river to find her and discovered her scent had led right to one of the tents. Since she had moved into the tent, he knew she had to be one of their shifter kind. He’d even hung around the next day, waiting to catch a glimpse of her, but there were several women, and he had no idea which one had been her. Two blonds, a couple of brunettes, and a red-haired woman—none of whom looked like the picture he had of Clara Hart, though.
Being a white wolf in summer had made it difficult to blend in, so he’d had to keep well out of sight.
Candice Mayfair was definitely the author of the books on the website, though she didn’t look like the photo her uncle had of her, if she was Clara Hart. She had the same compelling eyes, different color, but they got his attention, grabbed hold, and wouldn’t let go.
He carried her to her couch and set her down, staying close, his hand still on her arm until she seemed to regain her equilibrium.
“The wolf pup was yours,” she accused, jerking her arm away from him.
“Wolf pup?”
“Yeah, wolf pup. Don’t pretend you don’t know about your own wolf pup.”
Then all the pieces began to fall into place. Campers. Campfire. Food. Corey, the wolf pup she had to be referring to, hadn’t just found the food like they’d thought. Candice must not have been a wolf until that night.
“You fed him? Corey? His mom wondered why he smelled of beef jerky that night. We thought he’d found some at the campsite. Don’t tell me…he bit you.”
***
Some days you never know what’s going to happen!

Tangling with a White Wolf―Best Christmas Ever, or Real Trouble?
Romance writer Candice Mayfair never missed a deadline in her life―until an accidental bite from a werewolf puppy turns her into an Arctic wolf shifter. She’s forced to isolate herself in the wilderness to cope with her unpredictable shifting while she works on her deadlines. After all, for Candice, Christmas is just another day.
Enter private investigator Owen Nottingham, a wolf shifter hired to find Candice so she can collect her inheritance. They have a real problem: she must arrive home in human form, and that’s not happening during the full moon. Besides, Owen has a new mission: to convince the pretty she-wolf her best move is to join his pack in time for Christmas…and to prove he’s the only wolf for her.