By Linda Broday April 13, 2017
Riding toward us on a swift horse is THE HEART OF A TEXAS COWBOY! He'll gallop into bookstores and online on May 2nd. But I want to reveal this gorgeous cover. I just love cowboys and this model really makes my heart melt.

Book #2 Men of Legend series features Houston, one of the three sons of Stoker Legend. Houston was a bit of a surprise for me and he turned out to be my favorite I think of these larger-than-life brothers.

After his father loses half of the Lone Star Ranch in a poker game, Houston finds out the only way to get it back is to marry the daughter of the new owner--Lara Boone. He's never even laid eyes on her but he reluctantly agrees to give her baby a name. That's all Lara Boone asks for and that's okay with him. He has closed off his heart.

This marriage of convenience story takes many twists and turns as Houston drives a large herd of longhorns north to Dodge City, Kansas. Lara goes along when Houston can find no one else to fill in after his cook quits. And of course, the nursing baby has to come too.

Two days out, Houston discovers three riders following them. They're soon in the fight of their lives but he's determined to protect his wife and child at all costs. Only two questions remain...can they reach Dodge City before the killers pick them all off?

And will Lara be the kind of wife Houston has always dreamed of finding?

If you like a book loaded with suspense, danger, and a big helping of romance this one is for you. So enjoy the cover and read the short excerpt. 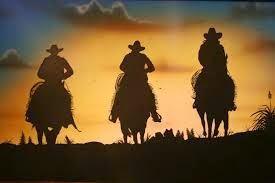 
Lara unpacked the food. “I didn’t want to start off my life here bothering people and being the helpless wife.”

This uncomfortable feeling between them was something Houston had to fix. “You’re never going to be a bother so get that notion out of your head.” He watched her sort the items into two piles. In one she put eggs, ham, cheese, butter and a loaf of homemade bread. In the other went the fresh vegetables along with various and sundry other things. Her eyes lit up when she removed the fresh apple pie.

“Since it’s getting late and I haven’t eaten today either, I thought we might scramble the eggs and fry some of the ham,” he suggested, seeing her indecision.

“I haven’t checked to see if we have pans to cook with.”

“We do.” The cooking utensils were left from a year ago when he thought....

“That settles it then. Go talk to Gracie. I might not know much about a lot of things but I’m an expert cook.” Lara’s hand collided with his when they bent to push aside a small curtain that covered the lower shelf. She froze. An awkward silence filled the room.

At last, Houston said, “Let me get the pan for you.”

She nodded and moved back. “I need to check on Gracie.”

Houston retrieved the skillet and set it aside. He stood staring out the window, cursing his incompetence as he bumbled his way through the strange maze of his life with this woman. At the sound of baby babbles, he turned to watch her sit the child on the floor.

Making up his mind, Houston went and gently took Lara’s hands. “We have to find a way to coexist. I can’t live with you frightened of my every move. We can’t occupy the same house without touching or bumping into each other on occasion. It’ll get easier as we go. But for now, trust me.”

“I do, Houston.” Her vivid green eyes held misery. “It’s just that I don’t know what you expect of me.”
Her statement caught him by surprise. What did he expect? Certainly not a wife given they were utter strangers. But not a cook and housekeeper either. That wasn’t right. No wife of his would ever fill the role of a maid to be at his beck and call.

Hell! He yearned for a stiff drink.

“A friend.” His answer surprised him probably more than it did her. “I expect you to be a partner. We both have gaping wounds that have to heal and things in our past to forget. I need someone who’ll stand with me in good times and bad.”

Lara’s smile transformed her face. She was a beautiful woman. He felt the urge to let his fingertips brush her delicate cheekbones and drift along the curve of her jaw.

“I can use a friend,” she said. “I’ll try not to ever make you sorry for your decision.”

“You won’t.” The words came out gruff and he didn’t know how he could say them with such confidence. Yet, somehow deep in his being a calm surety settled like disturbed silt back to the bottom of a riverbed.