My SEALs are ON SALE!

By Paige Tyler January 31, 2017
Did you know that my SEALs are on SALE! (Say that five times fast!) I'm gearing up for my next release in my SEALs of CORONADO Series with a Freebie, a Sale, and a Pre-Order! Dive in at the links below! And don't forget to share with your friends! :) 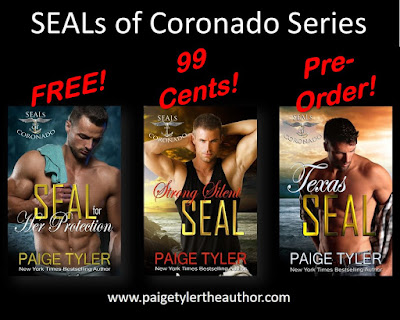 SEAL FOR HER PROTECTION is FREE!

He saved her from danger once before. Can he save her again, this time from danger he doesn't even see coming?

When investigative journalist Hayley Garner is kidnapped by terrorists, she's sure they're going to kill her. But in sweeps handsome Navy SEAL Chasen Ward to rescue her. After getting her to safety, he disappears into the night before she can even thank him.

Weeks later, while covering a story on the local navy base, Hayley runs into Chasen again. Even though she didn't see his face that night he rescued her, she can't forget his beautiful blue eyes.The attraction is immediate and intense, and Hayley finds herself falling into a fiery romance with the hunky hero out of her dreams. Guys like this aren't supposed to really exist, but Chasen does, and damn is he hot.

But ever since she got back home, Hayley has had the feeling someone's been watching her. Is it post-traumatic stress or does she have a reason to be afraid? Good thing she has a Navy SEAL to protect her.

Get it for FREE at these Online Stores
http://books2read.com/SEALForHerProtection

STRONG SILENT SEAL is on SALE for 99 Cents!

Wedding planner Felicia Bradford is in trouble. Mercenaries are holding her sister hostage and threatening to kill her unless Felicia helps them steal top secret information from the Navy’s Special Operations Headquarters. Having no other way to access the base, she pulls a gun on the first man in a Navy uniform she finds, demanding he get her through the gate.

Navy SEAL Logan Dunn just got back from a mission in Syria and is looking for a little down time to relax. That plan goes out the window when a beautiful woman shoves a gun in his back and begs him to do something he can tell she doesn’t want to be part of. Logan does what any Navy SEAL would do in the same situation—he saves the girl and takes out the bad guys.

But their actions that day kick off a crazy chain of events, including a fast-burning whirlwind romance, an out-of-control sister, an insane covert plot involving a defecting Russian pilot, a mercenary bent on revenge, and a sunrise wedding for a bride who never wakes up before noon.

Getting through her sister's kidnapping will look like a piece of cake compared to what comes next.

Get it on SALE for 99 Cents at these Online Stores!
http://books2read.com/StrongSilentSEAL


TEXAS SEAL is available for PRE-ORDER!

That was then—this is now.

When a woman from his past shows up on his doorstep, Navy SEAL Trent Wagner isn’t sure what to expect. The little sister of his best friend back in high school, Lyla Torres is all grown up now and even more beautiful than he remembered. He’d always had a thing for her back then, but that damn bro code meant she was off limits.

Before Trent can act on the sparks that obviously still exist between them, he’s going to have to use his SEAL training to help find her brother. His old friend has messed up his life since they were teenagers, getting into drugs and doing some time in jail, and now he’s missing. Trent knows it’s not a good idea to get involved in someone else’s problems, especially when they could end up getting both him and Lyla thrown into prison—or killed. But Trent has never been able to say no to a beautiful woman, especially one he’s had a crush on since high school.

Get your copy at these Online Stores!
http://books2read.com/TexasSEAL