They are Men. They are Brothers. They are LEGENDS.


I've waited so long to be able to show off this gorgeous cover and now the day is finally here. As usual, Dawn Adams, head of the Sourcebooks art department, has outdone herself. I just love this cover. The guy wears such a determined look on his face as though to say, "Bring it on." That's the type of man Texas Ranger Sam Legend is. He has a mental as well as a physical toughness and can handle whatever comes.


(Notice the smudges of blood and dirt on his shoulder, right arm and collar.)


Yep, he's used to trouble, whatever kind it is, even it flies at him from all angles. 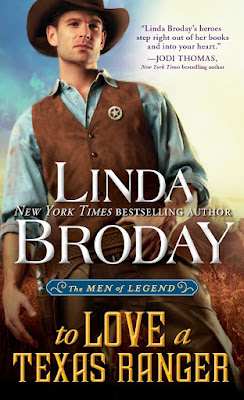 This is Book #1 of a brand new series called Men of Legend. A tough father, Stoker Legend, and his three sons fight for their own brand of Legend justice. Sam is a Texas Ranger, Houston is a rancher like his father, and Luke is an outlaw that no one knew anything about. He's Stoker's illegitimate son so he fights an uphill battle. This series, as well as each book, oozes with conflict.

TO LOVE A TEXAS RANGER opens with Sam staring death in the face as he encounters a band of rustlers who have nothing to lose.


He boards a train bound for his family ranch, The Lone Star, to recuperate…only to find himself locked in battle to save a desperate woman on the run. Determined to rescue the beautiful Sierra, Sam recruits an unlikely ally. But can he trust the mysterious gunslinger to fight at his side?

Sam is shocked to discover his new ally is not only an outlaw, but his half-brother. Torn between loyalty to his job and love of his family, Sam goes reeling straight into Sierra’s arms. Yet just as the walls around his battered heart begin to crumble, Sierra is stolen away. Sam will risk anything to save her—his life, his badge, his very soul—knowing that some bonds are stronger than the law…and some legends were born to be told.

This book releases on October 4, 2016. PREORDER at these links:


(Right now only paperback is showing but digital will appear soon.)