Vegans in the Old West? by Linda Broday

With difficult times and food as scarce as it was on the American frontier, being a vegan probably was pretty rare. Still…given people’s phobias, I have a hard time believing they suddenly developed in the 1900s. People are people no matter what century in which they live.

Carnophobia is the fear of meat.

And it’s not limited to vegans. It can apply to anyone who stopped eating meat because it wasn’t prepared well and made them sick. 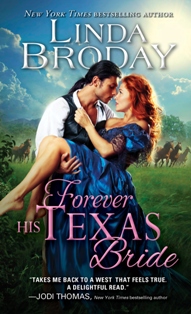 She stopped eating meat for a very horrific reason and it makes perfect sense. The only thing is, Brett Liberty has a hard time understanding at first. He’s definitely a meat eater. Game is plentiful and provides critical protein that gives a man energy so it seems odd to him that someone stops eating it.

I’m not going to say what Rayna’s reason is because it’ll give away too much of the story, buy she finds a true champion in Brett.

Once he learns of her phobia, he makes sure to have plenty of vegetables, fruits and eggs available for every meal.

No one understands inner pain more profoundly than Brett. When he sees hers, he folds his arms around her, vowing to protect her to the last breath.

The book completes my Bachelors of Battle Creek series. They're all available online and in bookstores everywhere.

Here's the Amazon link to the series: http://goo.gl/iGE7Hf

You can visit me at: