Which out here on the Oregon Coast means that we just had four days in which we more inches of rain fell than there were days. (One blast dropped almost 2 inches in less than six hours. During that time the winds were gusting up to sixty, eighty in the hills. I know that it's weird to think this way... but it's kind of wonderful to have real weather again, even when it is a little foul tempered. (We don't count it as really obnoxious until the four inches falls in one day and it falls sideways because the winds are gusting high enough that it tends to break the anemometers.) Yep! We're weird on the coast, but that's what the holiday season looks like on the coast and we welcome it.

Along with the wind we also get immense beauty, like these 30'+ waves that can roll in for days after a good storm. This was shot just south of where I live (not by me). Me? I'm busy in a corner writing and I must say it is being an absolute blast this holiday season.

Things to watch for:

Hot Tip: On 11/24 check your Bookbub promotions e-mail for an M.L. Buchman one-day sale at an awesome price!

Next week (11/25): A brand new Night Stalkers Christmas novel. Returning again is the Navy crew on the USS Peleliu. They once again face: African terrorists, horrid storms, and the truth about their hearts. Don't miss this one, it made me feel very merry! 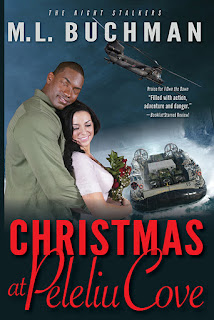 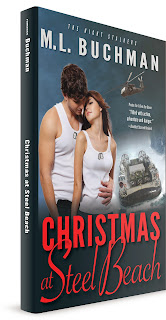 Right after that (12/1): Look for a brand new M.L. Buchman series, the first women of Delta Force!

DELTA FORCE
The most dangerous elite counterterrorism force on the planet:
• The best shooters •
• Known for gathering misfits and rule breakers •
• Will die to get the mission done •
SERGEANT KYLE REEVES
• The best of the new recruits •
SERGEANT CARLA ANDERSON
• The first woman to attempt Delta Force •

Surviving potentially lethal training is just the start of the path to Delta…and the hottest passion either Kyle Reeves or Carla Anderson has ever known. Then the call comes to take down the powerful Cartel de los Soles drug-smuggling ring, and Delta’s newest team leaps into the void. They know how to give duty their all—giving their hearts is going to take a new kind of courage.

Critics are already raving:
"Who needs food? Or sleep? Not when I can be reading Buchman!" Target Engaged, soreadthisbooktoday.com

"The romance equally as breathtaking as the action." – RT Book Reviews   4 1/2 stars

“Buchman cannot write a bad book, and this, possibly his best yet, is another great example of what military romance should be.” – Booklist, Target Engaged, Starred Review

Information on these and other books can be found at www.mlbuchman.com and find retailers everywhere.