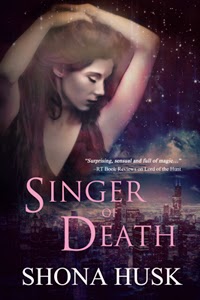 The Singer of Death (Court of Annwyn 5) is out now, and still at the first week special price of 99c :)

If you haven't read any of the series yet that's okay because each book stands alone, however if you want a little primer on all things Annwyn keep reading.

The Outcast Prince saw Caspian, a changeling and Prince Felan's secret son, get caught up in the hunt for the secret doorway to Annwyn while trying to keep Lydia safe from fairies. She wasn't impressed by the chaos but ultimately decided that Caspian couldn't really pick his family.

In Lord of the Hunt the Queen's mischief making continued. Verden, lord of the hunt, found himself in hot water and was saved by the lovely Taryn who was only in Annwyn to try and save her father's life.

Prince Felan discovered how hard it was going to be for Jacquie To Love a King as he had to fight to claim the throne of Annwyn from his mother's schemes. the secret enemy was revealed. During the battles in Annwyn plague swept across our world.

This of course left many dead and power gaps to be exploited. Henry Saint soon discovered that Annwyn doesn't like large gatherings of banished fairies but he was able to strike a deal while falling in love with the spy, Darah. He became the Darkling Lord.

A year after the plagues, half a billion dead and our world is slowly recovering. Humans still know nothing about fairies and that is the way Annwyn would like to keep it...the trouble is not all changelings are aware of Annwyn's laws and some of them are struggling to get by.

Singer of Death
Seductive…
An acid attack left Bronwyn scarred, but when she sings she is beautiful again. Her voice is hypnotic and powerful. For those moments she has control, no one can hurt her and no one is immune. Or so she thought.

Dangerous…
Jonah Sheppard is a thief on the run. When he meets Bronwyn his life begins to make sense. He isn’t human. He is a changeling like her. Their fairy blood has given them magic and he thinks they should use it. It’s a game she wants to play.

Intoxicating…
Bronwyn knows he only wants her for her voice, but she doesn’t care. And he knows that she could do so much better than a career criminal. A fragile trust grows but when they draw the attention of human and fairy authorities everything they know is torn away.

SHONA HUSK is the author of the Shadowlands, Court of Annwyn and the Face the Music Series. You can find out more information about Shona and her edgy romances at www.shonahusk.com or follow her on Twitter @ShonaHusk, Facebook www.facebook.com/shonahusk or join her newsletter: http://mad.ly/signups/119074/join