Countdown to Howl Continues all Next Week--Another winner?!

Between roof and plumbing problems, both leaks!!! And the blog tour, and edits on A SEAL Wolf Christmas, and Jaguar Fever and finishing up Silence of the Wolf, and dealing with a headache the size of Texas,  here is an excerpt from A Howl for a Highlander so I don't have to think too hard:


He didn’t say anything more, and Shelley was too stunned to speak. Wendy broke in, dying to know all about him. “That’s him? A Scottish hunk? Who sounds like he’s already way too intrigued with you? Don’t tell me you’re wearing that string bikini of yours,” she said.

Knowing Wendy, she’d want to forget her manufacturing crisis and fly to the island to check him out. She’d let him stay at the villa for free, too. Probably pay for all his meals, excursions, everything. She could certainly afford it.

Forget Shelley taking in needy strays. She figured Wendy would be the one offering a free room stateside for him. Until she learned he was a wolf. Wolves lived by different rules, and they had to be cautious about stepping over the lines.

“Yeah, he’s my new roommate.” Shelley didn’t want to tell Wendy she was wearing the bikini, and the Highlander’s tongue was practically hanging out of his mouth. He acted like he’d just shifted into the wolf and come back from a fast-paced run, heartbeat accelerated, adrenaline whipped up, and ready for a lot more exercise—this time one-on-one with a she-wolf. “Got to go, Wendy, and again, thanks for the generous offer. I’ll call you tomorrow.” Shelley knew she’d get the third degree from her friend, especially when Wendy learned he was a Highland wolf, not just human.

Shelley had never dated a wolf, and for the first time, she wondered why the hell not. Because they could be serious trouble, like a commitment forever? And what if she made a wrong choice? Their forever could last centuries.

She clicked off the phone and waved her towel at Duncan. “Didn’t bring a towel?”

His sexy mouth lifted slightly, his dark eyes nearly black and the skin beneath them crinkling with good humor. “Do you mind if I share yours?”

Feeling much better about her finances, she cast him a smug smile. “It’ll cost you.”

Hope you all snag a wolf for the weekend!!! 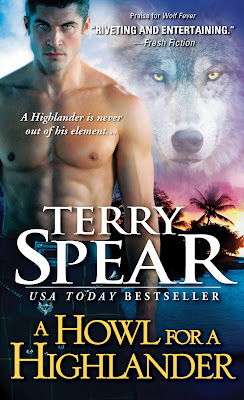 So if you had a chance to swim with Duncan, would you charge him to use your towel, or just lick all the water off him...??? :)

Have a super great day!

"Giving new meaning to the term alpha male where fantasy IS reality!"
www.terryspear.com