A Howl for a Highlander Blog Tour Coming Up!

I wrote half of the blogs for the guest blog tour for A Howl for a Highlander before Christmas as the tour is earlier than usual!!! Instead of starting Feb 1 for a Feb 1 release, it's beginning Jan 21!Which means my first New Year's Goal is to write the remaining blogs!!! And finish writing Silence of the Wolf,  start writing the next Highland wolf story and finish it, and the third jaguar story. I've also got to write my next Highland Medieval story as sales are phenomenal, and the next YA fantasy in The Dark Fae series! And I need to pitch another couple or 3 stories to Sourcebooks.

And that's just the beginning.

I'm going to my first RomCon, AAD and I'll be attending RWA Nationals....

Personally, I need to continue cleaning out stuff I don't need or use....I feel so great when I do that...but doing that is hard to do sometimes!!!! I have boxes of stuff in my barn. How much do you want to bet that if I just took them to Goodwill, I'd never miss them? I haven't opened them in 3 years! So it's time to clean out and I've really been working on it. It's almost like losing pounds, which is something else I need to do!! 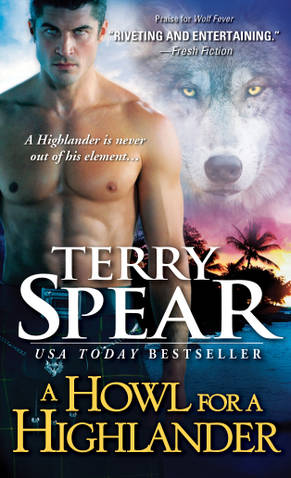 A Howl for the Highlander
(Book 10)

Duncan MacNeill is a Highlander at heart with a mission—find gray wolf and former stockbroker, Silverman who has stolen the family fortune and is purported to be living in the Grand Cayman Islands. As a Highland wolf, Duncan rarely leaves his native homeland and taking a trip to an island paradise doesn’t appeal. But keeping the MacNeill’s ancestral castle depends on making Silverman pay. What Duncan doesn’t plan for is the American botanist who distracts him from his mission and makes him realize what an island paradise really means.Shelley Campbell is teaching botany at a Florida college, when she receives an email from an old girlfriend, who’s renting a villa on the island and wants her to come to stay with her. Figuring she can study the old growth forest while she's there, and lecture about it when she returns home, she has no idea the secrets she might uncover. When her girlfriend’s a no-show, a Highlander turns up instead, and she has a choice—share the villa, or send him away and pay full price for the accommodations—which on her teacher’s salary is stretching things pretty thin. Since he promises to be no trouble at all, she lets him stay. And that’s when the trouble really begins!Amazon


DebraTaylor, The Night Owl Reviews
Score: 5.00 / 5 - Reviewer Top Pick
"Another fun and sexy read from Terry Spear! The Queen of shifter romance has done it again. Whether it be wolf or jaguar, this author is one of the best in her genre. Howl for a Highlander is the sizzling love story of sexy Scottish werewolf, Duncan MacNeill and his American she-wolf, Shelley Campbell.

If you're in the mood for a fun shifter romance then I recommend trying this awesome story. I guarantee you won't regret it and that, like me, you'll be hooked for life."

Here is the schedule for A Countdown to Howl

So are you ready for the New Years? And have lots of new stuff you want to do???