Secret loooovers: that's what we are...

I'm Macy Beckett, and I have a confession. 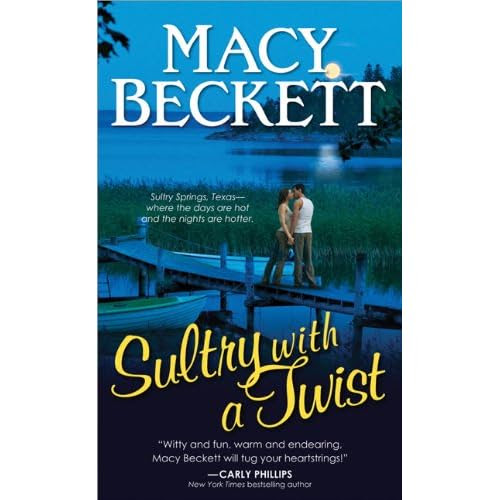 See the pretty cover up there? The one with moonlight dancing over a placid Texas lake? Well, I've been having a secret, obsessive relationship with that book. (Shh! don't tell my husband!)

It all started a couple of months ago when the FedEx man delivered a batch of ARCs (advance reader copies) to my doorstep. Sultry with a Twist is my debut novel, so this was the first time I'd seen my work in print form. It was magical. It was stunning. It was A REAL BOOK!

It also occurred to me that if I was holding my secret lover, other people were, too. (She gets around, but that's okay. We have an open relationship.) Not only had print ARCs gone out to bloggers and reviewers, but the digital copy was available on netgalley. That meant strangers were reading my book!

That's when the nasty beast Anxiety wrapped its tentacles around my body, bent me over the sofa, and had its way with me. Holy sh!t, real flesh-and-blood humans were reading my book! Would they love it? Hate it? What would Publishers Weekly say? (For the record, they called it a "delightful debut." Just sayin'.) And what about readers? Would they embrace my new series?

Anxiety was soon joined by his best buddy, Obsession. Together, the little bastards forced me into a daily routine of compulsively checking my Goodreads reviews and my Amazon rankings. I cried out, "But that's not helpful! I have work to do--other books to write!" However, my captors only laughed in my face and made me Google myself as punishment for my impudence. Obsession and Anxiety are merciless masters.

Veteran authors tell me I won't feel this way forever, that the novelty (haha...get it?) will wear off in a few months. I hope they're right, because I'm beginning to develop an eye twitch and a Merlot dependency.

And because I have no shame, I created a short film depicting my illicit love affair. Enjoy, and don't judge me too harshly. I'm suffering for my art! ;-)

But wait, there's more! Enter to win one of my lovers...er, I mean ARCs!