Baby, It's Hot Outside

I've been in my new home in Galveston for almost three weeks now. Here's what I've learned so far:

1. Driving down Seawall Boulevard on the weekend is life-threatening. Have you ever seen someone do a U-turn across three lanes of bumper-to-bumper traffic, so they could parallel park on the opposite side of a four-lane road? I have. More than once.

2. Half of the state of Texas congregates in Galveston Walmart at ten a.m. on Saturday mornings. Not fun. I guess I didn't need ice cream that badly. Lesson learned.

3. It's hot outside, baby. For the entire month, it's been a consistent 90 degrees with 80 percent humidity. It doesn't even cool down at night. There is some relief when it rains, but within half an hour it's back to 90 and then all that rain evaporates and we end up with 90 percent humidity. I don't mind heat. Really, I don't. Humidity doesn't bother me much, either. Yes, my hair currently looks like it had a love child with a poodle, but I'll take a lifetime of bad-hair days over shoveling snow. That humidity does make it miserable when you have to do more than lounge around. I call it "insta-sweat". Go get the mail--insta-sweat. Carry in the groceries--insta-sweat. Walk the dog--insta-sweat and insta-pant for the dog. Chase the cat off the neighbor's balcony--insta-sweat.

Thus far my plans to sit on the beach and write each and every weekend have been thwarted. I'm still trying to figure out where to put all my stuff and trying to get my life back in order. I drive past the beach, which is half a block from my apartment, while running errands. I see other people enjoying the beach. Other people lounging and swimming and having a great time. Next weekend I have more errands to run, so again I'll miss out on the beach. I know eventually things will settle down and I'll get to enjoy my new environment, but right now, everything is in chaos and I'm the type of person who can't take a break when I have a mile-long to-do list hanging over my head.

I had planned to write a post this month with pictures of my new desk which looks over the French doors that open to my balcony. They didn't deliver my new desk on Friday as planned, so instead that space is filled with a stack of boxes I can't unpack until the desk arrives. Doesn't make for nice pictures. I'd also planned to take pictures of my patio furniture on my balcony, where I'll eventually spend time writing in the evenings beneath the shade of a gorgeous palm tree, surrounded by all the pretty flowers in my flower boxes. It got dark outside before I finished assembling the furniture and planting the flowers. I also planned to take pictures of my favorite office space on the beach--in my beach chair with my feet in the surf, writing by hand in a notebook. Yeah, that didn't happen. I'd actually have to go to the beach to take that picture. 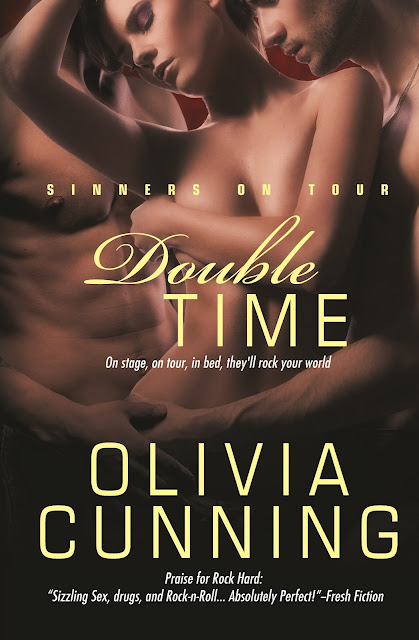 Double Time will be released this November. And its contents are even hotter than Galveston in July. It's a good thing I like heat. The boys of the rock band Sinners sure know how to turn it up to sweltering.

Are you having a hot summer? I hope it's more relaxing than mine has been. What have you done to unwind?