"May the Odds Be Ever in Your Favor" by Catherine Mann 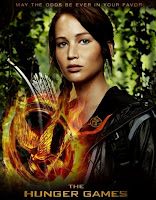 Anyone who’s read the Hunger Games or has seen the movie recognizes the quote in the title of today’s blog for our March theme of luck. “May the odds be ever in your favor” – a commonly repeated send off in the Hunger Games for the tributes going to fight to the death.

Hearing those words, seeing the characters , the Hunger Games world – it was all just as I envisioned when reading all three books in the trilogy. And that’s saying a lot!

I had such high expectations for the movie, it was an incredible relief not to be disappointed. Especially since I was one of the record breaking numbers to attend the midnight debut, along a friend and a van load full of teenagers.

Sure, there were some parts left out that missed, and I’ve had a blast discussing those with the scores of other people I know who also attended the Hunger Games on opening weekend. But then that’s just extended the fun of the movie even longer.

What are your thoughts on movie adaptations of books? Do you love them? Avoid them? Have any particular favorites?

USA Today bestseller Catherine Mann writes military romance for Sourcebooks and Berkley, as well as steamy romances for Harlequin Desire. A RITA Award winner, she resides in Florida with her husband, their four children, and numerous animal shelter rescues. Look for her books PROTECTOR (May), HONORABLE INTENTIONS (April) and UNDER FIRE (May). Website: http://catherinemann.com
Facebook: http://www.facebook.com/CatherineMannAuthor
Twitter: http://twitter.com/#!/CatherineMann1