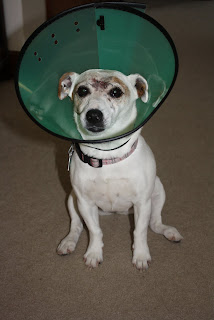 Procrastination? It's my middle name. Why do you think this blog is posting late?

Actually, it's more disorganization that procrastination. And perfectionism. All those --isms and --ations keep me from getting a darn thing done.

I've got lots of good reasons to procrastinate, though. My charming husband tempts me to go out and play -- or hang out at Starbucks -- when I should be working. And I have a couple of dogs that want lots of attention, too.

And the dogs are...unpredictable. For example, Scrape and I were headed out the door not long ago when my Jack Russell Terrier rocketed out the front door and attacked a neigbor's dog for no reason other than the fact that he dared to set one of his furry little paws on our our lawn. The dog was a cockapoo, and when we extricated him from the melee, it became clear she had tried her best to turn him into merely a "poo." Poor puppy!

The five minute fight turned into a five hundred dollar vet bill for the two dogs. Those cockapoos are tough customers and he turned out to be okay, but Libby now has seven staples in her forehead. Scrape calls her "zipperhead." She also has to wear the cone of shame for two weeks.

We never did get where we were going that day -- and that's just one example of how procrastination stems from complication.

Then there are the books. I write two a year -- nothing compared to some of my writer friends -- but we're all different. I'm not a fast writer -- I just write a lot. I spend most of my day in my fictional world, up in my office tapping away at the computer. I do a lot of background work, and a lot of editing and cutting and perfecting.

I know a lot of writers who have full-time jobs or even two jobs, along with little kids to take care of and still manage to blog daily and put out three or four books a year - good books. How the heck do you do it?

I'm talking to you, Sourcebooks Sisters.

I want to know your secrets to productivity! Put them in the comments below and maybe I'll find some hints and tips that will help me get more done.