The Making of a First Kiss by Shana Galen 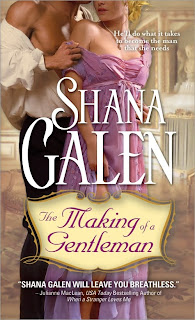 Let me begin by saying that my first kiss was nothing to write home about. It certainly wasn’t anything like the kiss I write between Armand and Felicity in The Making of a Gentleman. The interesting thing is that this kiss is Armand’s first. The comte has been imprisoned for twelve long years and has recently escaped France for the safety of his brother’s home in London. The duc, Armand’s brother, hires Felicity to tutor Armand, and the comte discovers she’s the only person who can touch him without causing him pain. He’s intrigued by her, and he’d like to do far more than kiss her.

Here’s a scene from The Making of a Gentleman…

“I’m not sure what you’re asking.” Her voice was low and trembling, but he did not think it was from fear. He narrowed his eyes and studied her face. No, she was definitely not afraid. Should he take that as a yes?

He wrapped an arm about her body, pulling her hard against him. The sensation was so strong, he almost gasped. Her heat and her softness burned into him. Yet he did not feel pain. He felt only longing for more. His eyes were on her lips now, and his hand had made its way into her hair. It was thick and soft. He had imagined it might feel warm, like sunlight, but it was cool to his touch.

He felt its fastenings and wanted to tug them out. He wanted that hair free, but he feared he had gone too far already.

“I think I know what you’re asking me now,” she said, and her voice sounded different. It was dark and low as the night closing in around them.

He heard the word he wanted, and that was all it took. He lowered his mouth and touched his lips to hers.

The feel of her mouth against his was a shock at first. Her lips were so soft and so pliant—not at all what he had expected. He felt he could explore that mouth forever and, acting on instinct, he coaxed her lips open so that he could explore further.
The sound she made in the back of her throat—a low moan—made his heart race and his blood thrum through his veins. He wanted…something. He didn’t even know what he wanted, but his body hungered for it more than it had ever hungered for food or water or companionship in all twelve years of prison.

And then, quite suddenly, he realized that he was hard, hard and straining almost out of his trousers. He wanted to push himself closer to Miss Bennett, to push against her. He struggled for control, grasped it.

And it was that moment that she began to kiss him back. Up until that moment, she had allowed his kisses, but now she returned them—her tongue twining with his, her mouth locked with his, her arms around his neck.

His blood ran so hot and so heavy that he feared he might lose his hard-won control. He was already thinking of pushing her onto the ground and then—what? He knew what he wanted to do next—was uncertain exactly how it would all work, but he had no fear that instinct would show him.

And then another instinct kicked in—one he was familiar with from long years in prison. The hackles on his neck rose and his body tightened, wanted to crouch. Something or someone was watching him.

He yanked himself away from Miss Bennett, tearing his mouth from hers and whipping around to scan the garden.

He saw it then. Saw the eyes watching him. Human eyes. No animal.

And he knew those eyes. Remembered them from another time, another life. With a howl, he charged.

And so the danger and adventure continues! But never fear, Armand and Felicity do get another chance at that kiss.

The Casababes are having a special Valentine's Day Celebration all month long. Leave a comment on our blog and you'll be entered to win drawings throughout the month. Also, EVERY commenter gets an entry in our drawing for a grand prize pack featuring more than TEN books by Sourcebooks authors. An entry a day is counted toward the Grand Prize! The more you comment, the more chances you have to win.