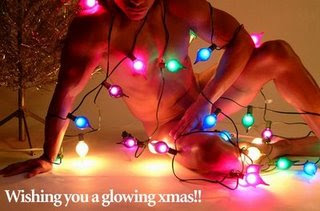 Making up stories is half the fun of writing them! And I'm not ashamed to say I write sexy werewolf sagas and love to dig up pictures of sexy werewolf men--yes, he truly is a wolf in disguise, how else do you think he got tangled up in the Christmas lights while he was helping me set up the Christmas tree?

So here is the story: You know humans can howl like wolves, or at least to their own ears, but did you know that wolves actually will come to them?

I needed a little help untangling Christmas lights. Don't we all? I think, other than trying to locate the rest of the tree branches and the top of the tree, that's what is most time-consuming, and unless you have a lot of time and lots more patience, the most exasperating. Unless of course you're imbibing in Christmas cheer. And then your lights could become even more tangled. Or, you might skip them all together. But what are Christmas decorations without a few sparkly lights?

The next best thing is to call for help. I'm not giving away the secret of which wolf he is--could be Darien or his brothers, Jake or Tom, or Hunter, Leidolf, or Chester. Or any one of the other wolfish guys. It's really your guess.

But when I howled for help, two showed up. I'm pretty sure. I was in the kitchen making turkey sandwiches, so I figured it had to have been two of them. How else could my wolf have gotten into the mess he was in? The trickster had done it for a joke, then shifted and took off, leaving my poor guy tangled in the lights. At least I think so. Just as I walked into the room with a platter of sandwiches, I caught him shapeshifting into his gorgeous hunk of a self. I quickly ditched the platter and snapped a shot.

For posterity sake. It's important to have visual stimuli while I'm working on my stories. But I couldn't reveal his face--secret society, you see.

We did get the lights untangled and on the tree. It's beautiful. And though I really hate to give him up to anyone, he's a wolf at heart, you know. So he has to return to his pack, but he said he'd help anyone else with their lights this year if anyone needs his help. Add a devilish wink here, and he's all yours.

I have to say, too, that Seduced by the Wolf is now listed on Amazon! Somehow it seems real when a new book is listed for pre-order!

And Deadly Liaisons is now 33% off the cover price for pre-orders and is shipping Dec 30!!

To Tempt the Wolf just was nominated for the Cupid and Psyche Award (CAPA) also!