By Terry Spear October 13, 2009
In Destiny of the Wolf, my heroine and hero end up in a cave--seems appropriate since Silver Town is an old silver mining town, and so at a point in the story...they end up in one of the them. 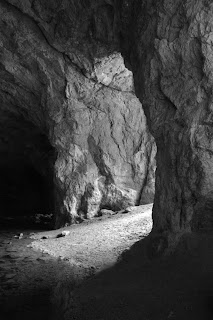 Have you ever been in a cave? Normally, they're cold. Very cold. And when I've visited them, I'm usually dressed for warm weather, so it's a real shock to the system. Deep in the bowels of the earth, you'd think you'd be getting closer to the hot molten rock of the center of the earth, and it would be warmer, right?

But then again, you're farther from the sun, so it should be colder, right?

In some caves, it's definitely colder. I visited one in Maryland, loved the shimmering quartz in the rocks, the water dripping, the stalagmites reaching to the ceiling and the stalagtites clinging to the ceiling, and in some cases, the one dripping sediments on the other until a column is formed.

But did you know that some caves deep in the bowels of the earth are actually warm? I visited one on an island in the Caribbean, the Hato Caves, made of limestone from fossilized coral within a coral reef, where the Arawak Indians left petroglyphs 1500 years ago. Long nose bats 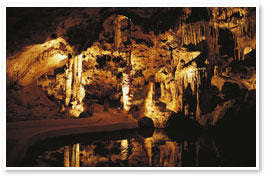 live there and it was once both a shelter for the Indians and a burial ground. No whispers of ghosts there that I heard, but maybe at night when all the tourists weren't around? Who knows. But it's so warm, it increases the limestone deposits and so it was really spectacular as far as all the wondrous out-of-this world-looking cave formations.

Hato Caves
When I was researching Yellowknife as a place to set Legend of the White Wolf, the gold mining caves under the earth there are also warm. There in the Canadian Arctic! Yep, the miners wore no shirts while they worked in the sauna-like conditions. And once they stopped mining, they hope to harness the geothermal energy underneath the earth to use for the city's energy resources.
Well, in Destiny of the Wolf, compared to a blizzard, the cave Darien and Lelandi end up in feels warmer, free of the chilling wind. Everything is relative, you know. But then again, they find just the way to heat things up while they're stuck in a cave until they can find a way out. :)

Did I mention I have claustrophobia?

So being jammed into small spaces, surrounded by rock walls and people behind and in front of me, with no quick way to escape really isn't a feeling I like to experience. However...seeing the beauty of some caves is...and so, conquering my fear, I couldn't have enjoyed seeing the wonders beneath the earth, millions of years old, and the amateur geologist in me, loving to see this for real, and not in pictures in a book, most. And the historian in me loves to visualize what it might have been for ancient peoples to have hidden in these caves for protection and shelter.

Have you visited a cave? Where and what was it like? If you haven't, ever desire to do so?