Where the Bad Guys are Werewolves! And the Good Guys are Too! 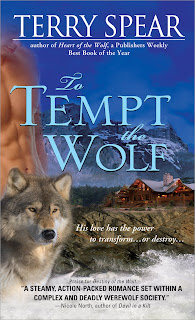 Five more days and To Tempt the Wolf is OFFICIALLY released!!! Chance at free copy of book for commenting! Extra chances for tweeting, posting this on blogs, and reviews of any of the wolf books! :)

So here’s a hint of what you’ll discover beyond the cover of one sexy man and wolf.

What do you do when you find the sculpted body of a man lying naked on a winter-chilled beach? Take him home with you, of course! With every intention of nursing the poor half dead guy back to health.

But you soon discover he’s extremely protective, a little bossy, sexy as all get-up, and talented. He can cook over an open fire when electricity is a problem. Can keep a body toasty warm on cold wintry nights. Can repair windows. And? Washing his clothes won’t be a chore. He’s out of them almost as much as he’s in them. So he’s a pretty handy guy to have around when: a severe winter storm threatens, stalkers are a problem, the electricity is out, ex-boyfriends come around, car accidents happen, and a family member is in real trouble. And lots, lots more.

As a wolf, he’s housebroken. Well, breaks a few things in scuffles with bad wolves, but only when he’s in rescue mode. And he’s careful about biting. Usually. Accidents don’t count. Don’t let him do all the grocery shopping though, unless veggies aren’t on the menu.

He’s got lots of issues. But that’s what makes him human. Mostly.

Yep, Hunter Greymere’s a hunk for all reasons. And Tessa Anderson? She’s not quite what she seems either. Which is what has Hunter stirred up from the beginning. But not only him.

It’s an urban fantasy—werewolf style—full of suspense, adventure, mystery, and sizzling romance set along the Oregon Coast, because I used to visit there when I was in college in Portland and loved it. Hunter’s from California because that’s where I’m from originally, and still miss the pines and listening to the wind winding its way through their needles. Which is why everywhere I live, a growth of pine trees suddenly appears. Truly! :)

And if you’ve been reading the series, Leidolf has his part in this story, too. He’s just as arrogant as Hunter, but you see more of a humorous side also. So if you dare, take a chance on the wild side.

Every girl ought to have a werewolf hunk to call her own. Don’t you think?

I'm on a blog tour now, and giving free books all over the place. This week I'm at:

Night Owl Romance: Becoming One with the Story
Drey's Library: Expectations
8/27: Cindy’s Love of Books
8/31: Rhi Reading
9/2: Scribe Vibe
9/3: Yankee Romance Reviewers
9/4: Horror and Fantasy Book Review
9/7: Love Romance Passion
9/8: Fang-tastic Books
9/9: Books and Needlepoint
9/10: A Journey of Books
9/14: Morbid Romantic
9/17: Romance Reader at Heart’s Novel Thoughts Blog
And if you comment here through Monday, you'll get a chance at a free copy of your choice of an autographed book!