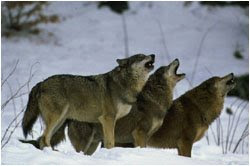 In praise of wolves and their fantasy counterpart, werewolves, here's a family of wolves howling for unity, for a pack gathering, for hunting, or comraderie.


In Destiny of the Wolf, I wanted to show a pack together, just like the old rallying words, united we stand, divided we fall. And for wolf packs, they must work together to survive. The same with werewolf packs if they are to remain anynomous.

So in Destiny of the Wolf, the gray wolf pack actually runs a town, although the human inhabitants don't know about the true nature of those who are in charge. In Heart of the Wolf, the werewolves lived amongst the humans, running their own businesses, but humans run the cities and towns. So I wanted to show what would happen if a lupus garou pack was in charge.

Darien Silver is getting over the loss of his mate, when her near clone arrives on the scene, looking to find some answers as to why her sister died. One little red wolf's appearance turns Darien's life and his pack dynamics upside down. Silver Town will never be the same.

In my wolf tales, I try to show how real wolves will act, and based on this, how werewolves would also. Normally, wolves only take one mate, except if their mate dies, and then often they won't take another. But in a couple of rare instances, I found information on an alpha male who actually had two mates at the same time. With my werewolves, it's not acceptable. Just like with humans, it's unacceptable to have two wives at the same time, at least in the States. So what happens when a werewolf breaks the rules?
Find out in Destiny of the Wolf, where a little red wolf shakes up a well-established pack, and teaches a brooding gray alpha a thing or two.
My question then is, how would you feel if you could have two alpha males at your beck and call, reversing this two females per alpha male kind of scenario??? 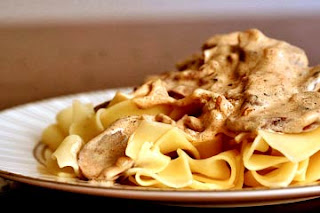 On cold days, my werewolves like a great hot meal just like the rest of us! Maybe their meat is a little on the rarer side. And maybe deserts aren’t as much of a draw as the heroine or hero in their sights. But all in all, tasty, nutritious hot meals on a cold day with the mate of their choice is only the beginning of a romantic night.

A long while ago, I read a book where the romance author included a southern recipe in the beginning of each chapter of her book. Recently, I saw one where the author included a mixed drink recipe. We all have to mention something about what our characters eat sometime in the book, even if they’re in a rush so I thought it would be fun to include a recipe for one of the meals my characters would eat.

At one time, I had included beef stroganoff as a meal Tessa Anderson prepares for Hunter Greymere on a cold wintry day in Temptation of the Wolf, debuting in September, but then opted for a hotter, spicier recipe I’ve always loved. I’ll share that later.

But here’s the background to my introduction to this delightful beef stroganoff dish initially. You know, every story has a story.

The first time I'd ever had beef stroganoff, my brother-in-law made it. He was a consummate chef in making fine dishes. From then on, I was hooked! But I didn't have his recipe so created my own that I've been making for years now.

The researcher in me at first wanted to know the origin of the meal before I shared it with everyone, thinking that it originally began in Sweden. So where did beef stroganoff truly originate?

And here’s the fun of research:

Some say that Russian Count Paul Stroganoff developed the dish in the 1800's. But others say, the French chef Charles Briere created it. The English served it much later, and the Americans even later than that. But much earlier in the 15th Century, the dish was served to King Matthias of Transylvania that sounded very similar to the beef stroganoff I make today with sour cream and beef strips. So, although I couldn’t relate it early on to my Scottish historical book, it looks as though I ought to include it in my vampire books! :)

However, werewolves and others will delight in it too.

Mix cornstarch with 1/4 cup water and once it's a liquid paste, add to the stroganoff mix. Cook over low until the sauce begins to thicken, then add sour cream. Once the sour cream is heated, serve over hot wide, curly noodles.

For a more healthy diet, use whole grain noodles. Also, a 1/4 cup of red wine can be added for a little different taste.

The best thing is it's quick, a great meal all in one, and leftovers are as delicious as the original meal!

So, do you have a favorite special meal you like to serve on cold wintry nights for that special someone?