By Sharon Wray May 06, 2022
I am so happy to announce that Love's Last Kiss, the next book in my Deadly Force romantic suspense series, is now available for preorder for both e-book and paperback. If you would like to request a free Advanced Reading Copy (ARC), it's available on two platforms: BookSirens and NetGalley. You will have to register, but there's no fee. 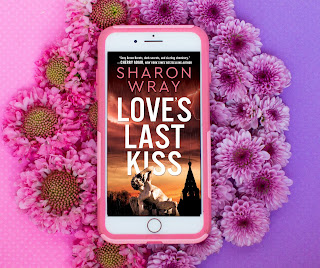 This book began as a short story, that turned into a novella, that decided (on its own!) to become a full-length novel. This is, technically, book 1.5 in the series since it falls between Every Deep Desire (book 1) and One Dark Wish (book 2). And later this month I’ll begin a blog series of how this traditionally published author became a hybrid author–and the chaos train I had to jump on to make it all work. LOL. So with no further ado….

Is love worth risking everything for?

Rose Guthrie, a reluctant erotic dancer, hasn’t trusted anyone since her parents’ death. Yet, to make money for her brother’s heart transplant, she agrees to deliver a sealed box to a mysterious buyer. Until the box—and the seller—disappear. Not surprised by the betrayal, her situation becomes more dangerous when she learns that two brutal arms dealers also want the box and are willing to kill everyone she loves for it. With one clue left, she breaks into Doom—Savannah’s violent, illegal fight club. Unfortunately, Doom’s referee—the sexy, ex-Army Ranger, Kade Dolan—stands in her way. Although she harbors a secret attraction to Kade, she can’t let him stop her. If she doesn’t deliver the box on time, she’ll lose everything. Including her own life.

Rose doesn’t trust ex-Army Ranger, ex-con Kade Dolan, but that’s okay—he doesn’t trust himself either. Why? Because he lies to everyone about everything, including his time in Leavenworth and his job as an illegal fight club referee. Then there are his two side gigs. The first as an informant for the Prince, the leader of a secret, two-thousand-year-old private army. The second, loving from afar the beautiful, secretive Rose Guthrie. After the Prince discovers Rose is the courier of a lost 18th century artifact, he orders Kade to help her find the box before their greatest enemy does. If they succeed, Kade must return it to the Prince. If they fail, Kade must kill her.

Betrayal or death. When faced with an impossible choice, Kade can’t lie anymore, at least not when it comes to what he’s about to do the woman he loves. But when Rose uncovers Kade’s lies, they learn a terrible truth—the 18th century box holds a secret far deadlier than they imagined. A secret that could destroy them all.

I hope you enjoy Love’s Last Kiss as much as I loved writing it. And here’s a gentle reminder. If you’ve read a book you feel strongly about (either good or bad), please leave a review. Reviews are crucial to an author’s career because the “bought bots” on the websites like Amazon and Barnes & Noble are tied to the number of reviews. So the more reviews a book has, the more people will see the book. So thank you in advance for any reviews you leave for your favorite books!

Sharon, a Jersey girl who landed in Virginia, is a chemical & patent librarian who once studied dress design in the couture houses of Paris… and worked as a Red Cross caseworker in South Korea. Because it took her forever to decide what she wanted to do when she grew up, she now writes romance and women’s fiction novels filled with suspense, adventure, and love.

Her bestselling Deadly Force romantic suspense series is set in a world with scary assassins who bow before killing, sexy Green Berets seeking redemption, and smart, sassy heroines who save them all. It’s also a world where, since Sharon is slow and clumsy, her chances of making it out alive would be slim.

She also writes small-town contemporary romances, gothic romantic mysteries set in the sultry south, and Christmas stories. Because nothing brings out the romantic feels more than stories set during the holidays.

Army wife, mother of twins, and caretaker of rescue dogs, she’s repped by Deidre Knight and Kristy Hunter of The Knight Agency.