Wrapping up a long series

By Hot Ash Romance Novels July 16, 2019
When I published my first series with Sourcebooks back in 2010, I never expected one spin-off series, never mind three! I write trilogies, and after the Strange Neighbors trilogy the werewolf's twin brother begged for his own book. So, I wrote the Flirting with Fangs trilogy. Again, a character in that series wanted to tell more of his story, so I got a contract for the Boston Dragons series. Them you guessed it, the phoenix character had several brothers and they had to tell their stories too! Thus, the Phoenix Brothers series was published.

So, here I am... Twelve books in, and it's time for a wrap-up. A beloved character we met in Flirting with Fangs, Mother Nature herself, finally got her book. It's considered a stand-alone, but it really does wrap up all the series and characters in a neat little bow. A gift from me to you. Here's the gorgeous new cover reveal! 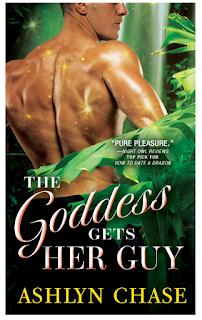 To preorder, go to this universal link and click on the store you'd like to order it from: http://books2read.com/TheGoddessGetsHerGuy

Here's what you'll have to look forward to:

After leaving his job as a cardiac surgeon, Dr. Aaron Samuels needs a new purpose in his life. Wanting to help his patients even if he can't operate, he heads to the Puerto Rican rainforest to find a cure for heart disease. He never imagined he'd meet a beautiful, mysterious woman, especially not one talking to a frog in the middle of the jungle...

Gaia—a.k.a. Mother Nature—has had it with paranormals breaking her number one rule: Never reveal your supernatural powers to humans, not even your mate. Fed up, she transports to the rainforest, happy to converse with her little frogs who don't talk back. But Dr. Samuels is a much better conversationalist, and Gaia can't wait to help him mend all those broken hearts he told her about.

When her attempts to help only complicate things between them, Gaia begins to wonder what would happen if she opened her heart and was honest with Aaron...and herself. Maybe her number one rule has been wrong all along...