By Alyson McLayne June 05, 2019
How many of you have friends that go waaaaaaay back? So far back that when you look at pictures of the two of you, you can’t believe you were ever that young (or that thin). Your hairstyles and the clothes you’re wearing make you laugh (or groan—it was the 80’s, after all), but you love the happy, carefree smiles on your faces. :)

Well, I have one of those friends, and she visited me today—all the way from Spain. 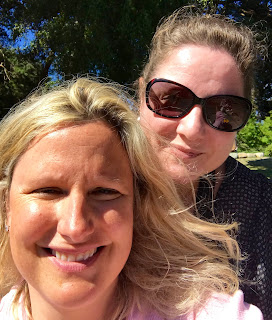 Trina and I first met in Mrs. Lang’s grade three class when we were eight years old. We lived in a small, northern city called Prince George surrounded by wilderness—and bears. Lots of bears. Winter meant snow piled high against our windows and summer meant trips down south to warmer climes or camping lake-side in tent trailers.

At eighteen we bought rucksacks and two plane tickets Down Under and we backpacked together throughout New Zealand and Australia—me with my pasty-white skin, slathering on sunscreen, and her turning a beautiful golden brown. There were no bears to worry about down there, just mad kangaroos, great white sharks and poisonous snakes and insects.

Trina never lived in Canada again after that. She stayed Down Under for a while with someone she met there, and when they broke up, she moved to Hong Kong where she eventually met her European husband. They ended up in Germany for several years before finally settling in Spain. She never wanted kids and has built up an art studio in her village, teaching classes, painting, and creating mosaics and ceramic figurines that she displays in various art galleries. She works with clay, oils, and paint brushes, and has a kiln in her studio.


My journey was more traditional. I returned home, got my degree, and then a few years later moved to Vancouver and met my husband. We had cats, dogs, kids, and mortgages—in that order. I always wanted children, and after struggling to conceive for several years, my husband and I were finally blessed with twins who are now seven. Between school drop off and pickup, I write adventure-filled historical romances set in the Scottish Highlands—I also write in my car as I wait for dance class and hockey practice to end, and I dictate scenes and story ideas into my phone while I’m walking the dog. The only physical, hands-on tools I work with are my laptop and sometimes my phone, and I only get to hold my art when my books are published.

Our lives are so very different… yet the same.

We spent the day together talking about family, relationships, getting older, and gossiping about news from our home town—about people we knew when we were eight or eleven or sixteen. And yes, we also went shoe shopping.

We talked about sex and menopause and the weird new lumps and bumps on our bodies. We even lifted our shirts to laughingly inspect the various rolls on our bellies and decide what kind of “fat” they were. Toxic fat? Baby fat? Stress fat? Menopause fat?

When my kids got out of school—Auntie Trina!!—we took the dog for a walk to the park, and after dinner, we sat in my driveway on lawn chairs while the kids zoomed around on their scooters.

It was a glorious day.

We both have milestone birthdays coming up this year, and our lives don’t intertwine anymore in the way they did when we were kids or in the way my life intertwines with my mom-friends or my writer-friends. Still, we’re connected at a deeper level. We’re not just part of the sisterhood, following the same path, we are sisters.

Sisters because of a deep, abiding love.

When I think about it, Trina’s probably the reason I often write strong female friendships in my books—the ones full of eye-rolling, laughter, and unconditional acceptance.

My book HIGHLAND CONQUEST (#2 in The Sons Of Gregor MacLeod) is dedicated to Trina because my heroine, Amber, has a long-time best friend named Isla. The scenes between Amber and Isla are some of my favorites. 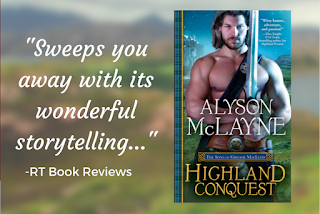 Isla gave her an assessing stare, picked up her blade, and started to shape Amber’s hair. “Are you in love with him, then?” she asked after a minute, slicing and fluffing and layering the strands.
Amber found herself holding her breath. “I am in…great annoyance with him most times. And in great…infatuation with him other times. I think about him often—where he is, what he’s doing, how his hands and mouth would feel on my body. Things occur to me, interesting things, mundane things, and he’s the one I want to share them with.” She scowled. “He makes me laugh.”
Isla scowled back, “He should be hanged.”
“The only man whoe’er made me laugh before was Niall.”
“And you certainly doona want to tup Niall.”
“I ne’er said I wanted to tup Lachlan either. I said I want his hands and his mouth on my body, but I have no interest in tupping.”
“But if you were married—”
“I ne’er said I wanted to marry him, either. And I’m certain he doesn’t want to marry me.”
“Why doona you want to marry him?”
“Well…why should I?”
“To have bairns.”
“I doona know if I want bairns.”
“Aye, you do. To have intercourse, then.”
“I doona want to have intercourse.”
Isla rolled her eyes. “Aye, Amber, you do. You willna be able to get enough of it.” She put down her blade and stared at her, fluffing and tugging strands into place. Finally, she said, “To have a man to call your own, who claims you as his own, who you can tell everything to and he’ll understand what you mean even if you tell him naught.”
“Sounds like witchcraft to me.”
“Nay, ’tis something divine, something sacred between the two of you, not profane or mundane, and when you have it, you’ll know. Do you want that, Amber?”
“I… I… Aye, maybe I do.”
“Well, is Lachlan the man who can give you that?”
“I doona know.”
Isla carefully took off the towel and shook it out the window. “I wish we had a mirror, so you could see how bonnie you look. If we were at court, you would start a trend for all the ladies to have short hair. Your eyes were beautiful before, but now they’re dazzling. And your lips and cheeks… Amber, you look like an angel.”
Amber raised her fingers to her hair. The ends fell evenly about halfway down her neck, with shorter pieces on top and others framing her face.
Isla kissed her cheek. “Niall has asked Alban and me to be there this evening, but I’m not feeling well enough. I’ll leave it up to you whether you tell Niall. Maybe you’ll want to be alone with Lachlan tonight.”

May we all have an Isla, or a Trina, in our lives.

Alyson McLayne writes historical romance set in the Highlands of Scotland. Highland Conquest, Book 2 in her series, The Sons Of Gregor MacLeod, is out now!
He was looking for vengeange…
Laird Lachlan MacKay never planned on leading his clan, but when his older brother was murdered, he was left with no choice. His vow to avenge his brother has led him to the MacPherson clan—and their bewitching healer, Amber.
Instead, he found her
Amber MacPherson is desperate. Dressed as a boy to escape her clan's treacherous leader, she runs right into Lachlan—who orders her detained. At first she causes him nothing but frustration, especially when she blackmails him into helping her clan. But when she’s threatened by the same man who murdered his brother, Lachlan will do whatever it takes to keep her safe—and by his side. 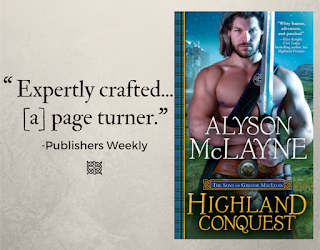 Alyson McLayne is a mom of twins and an award-winning writer of contemporary, historical, and paranormal romance. She’s also a dog lover and cat servant with a serious stash of dark chocolate. After getting her degree in theater at the University of Alberta, she promptly moved to the West Coast of Canada where she worked in film for several years and met her Prop Master husband.
She and her family reside in Vancouver with their sweet but troublesome chocolate lab named Jasper.
Please catch up with Alyson on social media. She loves chatting with her readers!
Website | Twitter | Facebook | Goodreads

And if you want to see more of Trina Doerr's art, please check out her website at 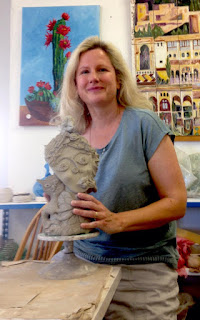