In honor of International Women's Day!

An excerpt from HIGHLAND BETRAYAL. Not only is Maggie a strong Highland lass, she's a warrior woman… 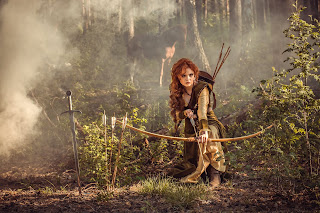 “How much farther today?” she asked as she craned her neck to look up the mountain.
He pointed to the top in the distance, over rocks and shale, which could be dangerous to both them and the horses. “A few more hours to the ridge—that’ll be hard going—then we’ll have several more hours to the cave where we’ll camp tonight. The incline will not be so bad once we’re on the ridge, but the path will be rough. And the lads willna be able to help you once we reach the shale. They’ll need to steady the horses.”
She nodded, but he could see her eyes had dimmed.
Then she sighed heavily and struggled to her feet. “’Tis best we shoot now, then. I doona want my arms shaking so badly I canna aim straight. You’d win by default—the only way, for sure.”
He let her have her fun. Although truth be told, it might not be a jest. He suspected he would beat Maggie only if she allowed him to.
And he'd take it.
Aye, Maggie letting him win would be as good as telling him she would marry him. Until then, he would fight for her hand with everything he had.
“Choose a spot, then, and I’ll go first. I wouldnae want to be accused of following your arrow’s path again.”
She smiled, obviously enjoying herself now as she pulled out her daggers. “Not to worry. We’ll use knives instead. And maybe a moving target.”
The other men had also risen.
“What did you have in mind?” Finn asked, his boyish face alight with excitement. 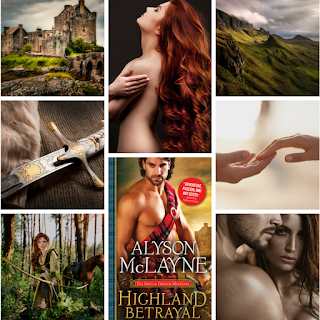 “I’ll show you,” she said. “You doona mind helping, do you?”
Finn’s smile faded, and he swallowed nervously. “If you think ’twill be safe.”
“Well, I willna miss. But you may want to jump back when it’s Callum’s turn.”
The corners of his mouth dipped down, and Callum took pity on the lad. “We willna aim at you, Finn. Maggie would ne’er risk your life that way. I’m sure she means to have you throw a target in the air.”
“Aye,” Maggie said, her lips twitching. “If Callum’s scared he’ll miss and hit you instead, we’ll do it his way.” She searched the ground, then picked up two flat rocks, both about the size of her palm, and held them out to him. “Choose your target.”
He did, after making a show of looking them over carefully. He just liked being able to hold her hand, his fingers gliding over her soft skin, until she shivered.
And if it threw off her concentration, all the better.
“I’ll take this one,” he said and passed it to Finnian. He reached for his dagger as Maggie passed Finn her target, and the young man hopped across the mountain like a young goat until she whistled.
He stopped. “Right here?” he yelled.
“Aye, lad. We’ll let you know when we’re ready—and keep an eye out for the daggers when they fall!” Callum said.
He turned and saw Maggie flipping her dagger in her hand—almost a ritualistic movement to help her focus. She never once looked at her blade. Instead, she stared above Finn’s head in the distance, no doubt envisioning the shot in her mind’s eye.
Fortunately, the wind was calm, and it would simply be a matter of anticipating and hitting the target.
“Do you want to see him toss it first?” he asked.
“Nay. Let’s just do it.”
His stomach tightened with anticipation—with nerves, even—and he took a deep breath to relax his muscles. The weight of what was riding on this competition sat heavily on him. He was a good shot and would pit his skills against anyone, but he was afraid Maggie might prove his better.
And this was a contest he could not afford to lose.
“I’ll go first,” he said. He adjusted his position, then whistled at Finn. The lad tossed Callum’s target in the air. In a single motion, Callum pulled his arm back over his shoulder and loosed his dagger. It hit the rock seconds later, before the target reached the top of its arc, and the men sent up a cheer.
Callum resisted punching his fist in the air as he switched spots with Maggie, his heart conflicted. Aye, he wanted to win, but he also didn’t want her to feel the shame of missing her shot. 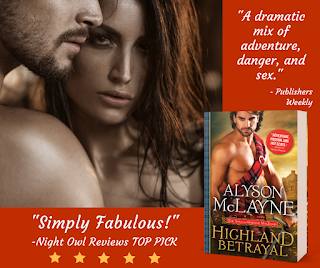 He wondered if she felt the same.
She was grinning from ear to ear when she yelled at Finn, “Now!”
Finnian tossed her target high in the air. Callum expected Maggie to pull her arm back and loose immediately, as he had, but she waited until the target was on its way down.
The men yelled out with concern, but she waited until the very last moment. Only then did she throw the dagger, hitting the target just before it reached the ground a few feet from Finnian.
The men erupted with loud shouts of astonishment and revelry, and this time Callum couldn’t stop himself from punching the air and yelling along with them. His shot had been precise; hers had been a thing of beauty.
He looked over just as she gave the men a deep curtsy. When she straightened, she looked up the mountain, hands on her hips, and blew out a heavy puff of air. “If only this mountain were so easy to beat!”
His pleasure turned to indignation. “You did not beat me!”
“Tell that to the men,” she replied with a saucy grin, then cupped her hands over her mouth. “Finnian, bring my dagger. And somebody help me up this great, bloody rock!”
* * * 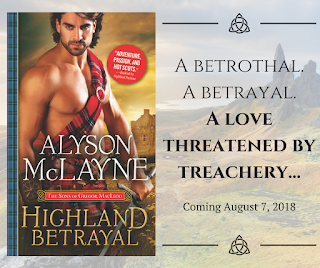 To keep her safe, he betrayed his promise.

Laird Callum MacLean vowed to marry Maggie MacDonnell. But when his father's apparent suicide makes him laird of his clan, Callum must unmask his father's killer before bringing Maggie into his dangerous home.

She's a strong Highland Lass. She can save herself.

Maggie's home isn't any safer. When Callum fails to return, Maggie does what any resourceful Highland lass would do. She escapes—and find's herself toe-to-toe with Callum, who's determined to fulfill his promise. Maggie can't bring herself to trust him with her heart again. But with a traitor still at large, they must rely on each other in every way, or their clans—and their love—will be destroyed.