Strong Hold, the last book (#5) in the Redemption Series, features the story of Shayla Tanner and Zack Grayson.

Seven years have passed since Zack left Shayla. Seven years of regret and emptiness. Will she ever let down her guard and give Zack a second chance at love?

Enjoy this excerpt from Strong Hold: 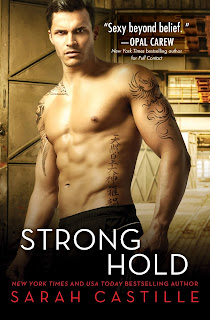 “Christ, Shay.” He scrapes his hand through his hair. “You’ve always been too trusting. Reg Knight is as far from a decent guy as you can get. He’s a piece of scum who plans to use you personally and professionally, and I’m not going to let that happen.”
“It’s my choice. My choice.” I thump my chest, looking away so he doesn’t see how close his comment about being too trusting hit to home. He needs to understand that it’s a decision I have to make, and the price will be mine to pay. “If I want to go out for a drink with him, I will. If I want to fight Gordon, I will. If I want to accept an offer from Radical Power, then I’ll accept the offer, and I’ll be the best damn fighter they’ve ever had.”
“No, you won’t.” He thuds his fist on the low stone wall surrounding the courtyard. “I won’t let him do to you what I’ve seen him do to other female fighters.”
“I don’t need you to protect me.” I struggle to keep my voice low so the people in the courtyard don’t overhear. “I’m not the teenage girl who knew nothing of the world except what you showed her. I don’t even understand what’s going on with you. We’re professional, and then we’re not professional. We’re friends, and then we’re not friends. You’re my coach, and then we have sex, and you run away to Seattle and leave me thinking I’m back to training with Torment and Fuzzy for three whole days.”
“I needed some time to get my head around the fact that all you ever wanted from me was physical.”
My hands curl into fists so tight, my nails bite into my palms. “That’s not fair.”
“That’s what you told me the other night.”
“Right now, I don’t want to get involved. Back then, I wanted everything. I was devastated when you left. I felt like a huge piece of me was missing. I was a young girl in a new city I never wanted to live in, with a new ballet company I didn’t want to dance for, and I’d never been alone before. I always had you.”
“And then you traded me in for him.” His voice rises in pitch. “What were you thinking? I left you so you could have a career, so you could go out and live your life, not tie yourself down to some…what? What did he do? What was so compelling about him that you would get married at fucking nineteen years old?”
Bristling, I throw caution to the wind, giving him information I know I should keep to myself. “He was the company’s artistic director.”
“Jesus Christ.” He groans and tips his head back. “He was your boss.”
“It doesn’t work like that in a ballet company, and you know it.”
I hate this. Zack and I never fought when we were together. We disagreed about things like sports teams—I was a Cubs fan; he supported the White Sox—how long I spent at the studio, or whether my plans to run/jump/ride/dive were too dangerous—yes, they were, and I always did them with Zack by my side.
“I know the artistic director has a lot of power,” Zack says. “I know you don’t get the job in a world-famous ballet company without a shitload of experience and a lot of years behind you. And I know you don’t sleep with a much younger, innocent corps dancer unless you’re a fucking bastard who has no morals and who misuses his power to get what he wants.”
Anger surges inside me. Not because he’s wrong, but because these were the questions I should have asked myself, the red flags I shouldn’t have ignored.
“You didn’t want me,” I shout, the words I have never been able to say ripping from my throat. “What was I supposed to do? It never got better for me. Every day without you was like dying all over again. Even after a year, the pain didn’t fade. I was empty inside, and there was nothing to fill that space, because it was meant for you. Damian was kind to me. He cared. He looked after me, and he helped my career. He wasn’t my soul mate, and he never pretended to be, but in the beginning, we both got something out of that relationship that made us happy.”
If the words that spill from my heart have any effect on him, he doesn’t let me know. Instead, his eyes narrow, and he deepens his tone.
“Do you think I felt any different? Do you think I didn’t feel your loss every fucking day? But I didn’t give up on you. I didn’t throw away a ten-year relationship on the first woman who crossed my path. I still felt you, Shay.” He thuds his fist on his chest above his heart. “Right here. And when I knew I could do right by you, when I could give you everything you deserved, I came for you, and you were gone.”