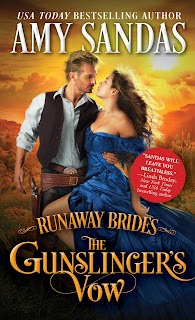 The Gunslinger's Vow is the first in a vibrant, sensual historical Western Series, featuring runaway brides searching for freedom in the Wild West.

Having previously published series in Regency England, I'm stepping into the American Old West! Check out the BookPage's article where I explain why I made the change. And...

Enjoy this excerpt from The Gunslinger's Vow!

Her blue eyes met his, and the emotion in them hit hard to his gut.

“Boston or Montana?” she asked softly.

Suddenly uncomfortable with how personal the conversation had become, Malcolm shrugged. He wasn’t sure which option might be the less intrusive of the two.

“There was a time I thought I’d live my entire life in Montana. If you’ve ever spent any time there, you’d know it is beautiful country.” Her eyes went dark as she stared into the flickering flames, and her voice lowered with memory. “When I went East, I didn’t want to like Boston. It hadn’t been my choice to go. But I made friends, which is something I didn’t have much of in my childhood, and I started to appreciate the opportunities a big city could offer.”

She laughed, a warm sort of throaty chuckle. “My Aunt Judith scolded me countless times for my curiosity. I had a ceaseless compulsion to explore every corner of the city, the culture, the people. So very different from what I’d known before, but beautiful in its own way. Eventually, I came to love Boston.”

“More than Montana?” He shouldn’t want to know. He wasn’t even sure where the question came from

Her eyes met his. Gold flames danced in the blue of her gaze. “I guess that is what I am hoping to find out.”

Her boots were dusty, as was her split skirt and the shirt she wore under the oiled slicker he’d bought her. She’d pushed the wide-brimmed hat off her head, and it hung down her back by the thin cord around her neck. Her dark hair was just barely secured at the back of her head in a loose knot that allowed fine wisps to fall against her face and neck. She had dirty hands and a weary gaze, yet she displayed the hint of a smile about her mouth.

Despite her dishevelment, the fine Eastern lady who’d boldly strode into the Painted Horse Saloon was still there. She was present in the woman’s elegant posture and the refined way she spoke. In her quiet dignity and feminine softness.

It’s just that Malcolm was seeing something else besides all that. A light of adventure in her eyes, competence in her manner, and a deep, barely perceptible yearning.

There was more to this woman’s story than he’d first suspected. And even more going on in that head of hers than what she shared with her deceptively easy manner and light conversation.

After a few moments of returning his silent stare, she broke eye contact with a flutter of thick eyelashes and an almost rueful curl at the corner of her lips. “What about you, Malcolm Kincaid?”

He leaned back and eyed her with a lifted brow. “What about me?”

“Where do you come from?”

“Are we sharing our life stories now?”

Her gaze flicked back up to meet his. “I don’t need to know everything, but a little something wouldn’t hurt. We are going to be together for a couple of weeks, after all. Is there a reason we must remain strangers?”

Malcolm felt a rush of heat though his blood. Her innocent words reminded him of just how much he’d like to get to know her. Just not in the way she meant. And not in any way he intended to explore.

No matter how badly he wanted to taste that sweet mouth of hers.

He cleared his throat. “I ain’t got much to tell.”

She smiled. “That sounds more truthful. You like your privacy. I understand. Perhaps you can just tell me how you came to be a bounty hunter.”

Malcolm shook his head. The woman was relentless.

“I am not going anywhere, Malcolm. You may as well open up a bit.”

Damn him, but he liked the sound of his given name on her lips. “I just sorta fell into it,” he answered gruffly.

He tossed her a heavy scowl for her persistence, to which she responded by grinning widely.

“I was looking for someone else when I happened upon a man I’d seen on some wanted posters in the last town. I wouldn’t have bothered with him, but he issued a challenge I couldn’t refuse. He lost, and I claimed the bounty.”

“Why on earth would he challenge you?”

Malcolm shrugged. “He said he didn’t like the way I talked.”

He smiled at her incredulous tone. “Why? You like my Texas drawl?”

Her expression lit up at the confession. “I should have guessed. I once met a man from Houston, and you do have a similar manner of speaking.”

“Houston is a far cry from where I grew up.”

“And where was that?”

He stiffened. It had been years since he’d thought about the cotton farm where he’d grown up. He and Gavin had basically agreed when they’d left that there was no reason to ever bring up the subject of their beginnings.

“Doesn’t matter,” he said with a tight jaw.

She closed her mouth sharply and stared hard at him across the flames. Darkness had fallen while they’d talked, and the night was close around them. The fire lit her face and cast sharp shadows beyond. It was clear that she wanted to press the matter, wanted to insist he tell her everything. The woman’s curiosity ran as deep as her stubborn nature. But his past was something Malcolm preferred to leave alone. There was nothing but pain and loss behind him.

After a bit, she lowered her gaze. “All right, I am sorry for prying.” Her blue eyes lifted again to catch his, and something in her expression twisted around his insides. “But yes, I do like your drawl.”