I’ve been doing some research on bathing in the Regency period. Did you know that they actually had showers that early on? It was quite the innovation. 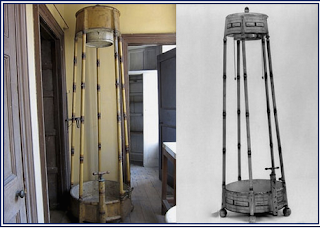 There were some drawbacks, however. First of all, the water was not heated. That might have been pleasant in the summer, but in any other English season it was probably beyond bracing.

Second, the shower used the same water over and over. A pump took water from the lower basin (around your feet?) to a cistern at the top. Repeatedly. And for successive showerers, I guess. That doesn’t sound too appealing.

I wonder if the person had to pump for himself? Or did a servant stand there and do it? Bathers choice, I suppose.

Having seen this, I’m filled with gratitude every time I turn the tap and get lots of hot water for my shower.