I’m fond of tidbits of research. Did you know that the name of the month February comes from the Roman festival of Lupercalia, celebrated in mid-February? Aimed at purifying the city and promoting health and fertility, Lupercalia was also called "dies Februatus." Thus the name of the second month.

There were sacrifices and offerings and a feast. There was also apparently a naked run anticlockwise around the Palatine boundary in ancient Rome. Plutarch described it this way:

...many of the noble youths and of the magistrates run up and down through the city naked, for sport and laughter striking those they meet with shaggy thongs. And many women of rank also purposely get in their way, and like children at school present their hands to be struck, believing that the pregnant will thus be helped in delivery, and the barren to pregnancy. 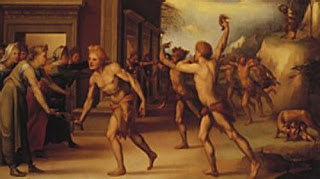 Sounds like quite the occasion. Some say that Valentine’s Day was a substitute offered by the church to tone down this festival. Maybe the “noble youths" could bring chocolates on their run?