Running with the band - ONE MORE PROMISE

By Samantha Chase January 31, 2018
When I originally planned this series, I wanted it to be called "Rock and Roll Fantasy".  Unfortunately, I write sweet contemporaries so the word 'fantasy' was a no-no.  Or so I was told. When we decided to tie the series in to my Shaughnessy Brothers series, things just fell into place.  But we still needed a series title. What we eventually came up with was Band on the Run and honestly, it fit.  All three of the men in the series are running from something and while I was never a fan of the song, the title worked.

Just a little background information for you. 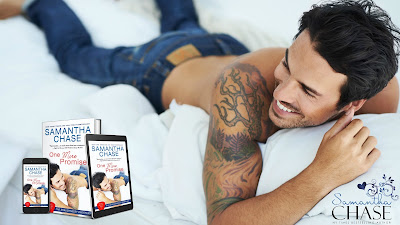 ONE MORE PROMISE is book two in the series and focuses on bass player Dylan Anders and his life after a forced stint in rehab.  Doing his best to clean up his image and get his life back on track, he's faced with having to deal with some community service.  It comes in the form of a literacy campaign where he'll be one of their celebrity endorsers.  Good news for him, not so good news for the publicist in charge - Paige Walters.

Paige wants a roster of authors and intellectuals.  What she gets once her bossy sister steps in and takes charge, is a group of celebrities she doesn't know - including Dylan.  And to add insult to injury, her main task is basically to watch over Dylan.  Needless to say, this doesn't go over well for either of them and sparks instantly fly.  Basically Dylan is trying to not come off as the same guy he used to be - the one who hit on and slept with all the women he worked with, and Paige doesn't think a guy like Dylan could possibly be interested in or attracted to her.

The struggle for both was real!

I had the MOST fun writing this book.  Part of it is because I love a musician hero (my own husband is a drummer), but mostly because Paige and Dylan were such opposites that I was able to do so much with them!  She's a nerdy-hipsterish girl and he's...well...a rebellious rock star!  Here was my inspiration/mood board for the book while I was writing: 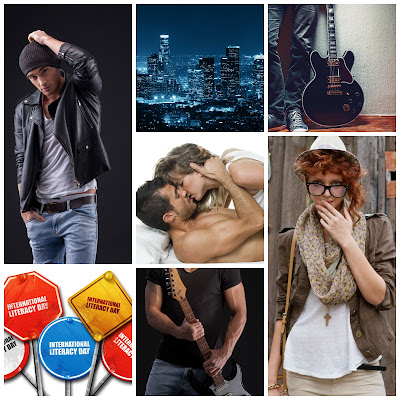 Here's an exerpt from ONE MORE PROMISE:


Turning, he saw Daisy walking toward him. She smiled brightly but seemed a little bit shy about approaching.
“Hey, Daisy,” he said, smiling at her. “How are you?”
She giggled softly. “I’m fine, thanks. And you?”
He nodded. “I’m doing well, thanks for asking. Um…have you seen Paige? I can’t find her.”
“Really?” Daisy asked, seeming confused. “She was by the door a minute ago.” She looked past him toward the entry and nodded. “Yup. There she is. You must have walked right by her.”
Dylan turned around and looked toward the door, but he didn’t see Paige. He spotted a staff member talking to one of the—
Ho-ly… Words escaped him.
He blinked hard and then focused again and swore his eyes were deceiving him.
“She looks great, huh?” Daisy said from beside him. “But don’t tell her that. When I said it earlier she nearly bit my head off.”
“Wait, she… What?” He turned his head to look at Daisy and found her nodding.
“It’s true. She got ambushed by Ariel and her glam squad or something like that, and they gave her a makeover. I think she looks amazing, but she doesn’t want to hear that. Maybe her Spanx are a little too snug.”
“Her… What the hell are Spanx?” he asked, but at this point, he didn’t care. He wanted to go over and talk to her.
He needed a minute to…get his head in check.
The dress she was wearing looked like it was made for her. It showcased all her curves. With all her layered dressing, Dylan never would have imagined she was hiding a body like this. All lush curves and a tiny waist and just… Wow. He felt himself starting to sweat. He was already struggling with the erotic dreams of her where he had no idea what was underneath her layered wardrobe. But now that he’d seen her like this?
Yeah…he’d be wise never to close his eyes again.
“That burgundy color looks amazing on her. That’s what I told her,” Daisy was saying beside him.
“It brings out her eyes. And that’s another thing—her contacts! She never wears them because she says they’re a pain, but look at her face without those glasses! Her eyes are naturally huge. All this time I thought they were getting magnified from the glasses, but they’re not. Go figure. And look at her hair…it’s like something out of a shampoo commercial! Why does she wear it in a ponytail if it can look like that?”
“I gotta go,” he murmured and made his way toward Paige, feeling as if some invisible force was pulling him forward.
His eyes scanned her from head to toe and the stilettos on her feet were the stuff of fantasies—superhigh, superskinny heels and tiny straps and… Dylan groaned. He needed to focus on something else before he reached her; otherwise, everyone would know what kind of thoughts he was having. Seriously, he was already getting hard, and the closer he got, the worse it was getting.
Baseball stats.
Guitar tuning.
Chess.
All these things were innocuous thoughts, and yet somehow, his mind had managed to turn them dirty.
Baseball had him thinking of all the bases he’d like to reach with her.
Guitar tuning had him imagining playing her the way he’d play a guitar.
And naked chess.
He was screwed. 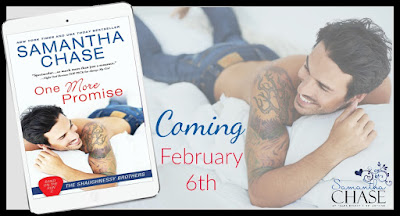 ONE MORE PROMISE comes out on Tuesday and I cannot wait!!  You can preorder your copy now at  https://mailchi.mp/chasing-romance/one-more-promise

And if you're looking to get caught up on the series, you can read book one now - ONE MORE KISS.  This is the story of Shaughnessy guitarist Matt Reed.  He's in crisis mode.  The band is on hiatus and Matt takes a chance on branching out and taking the lead in a Broadway show.  Unfortunately, it fails horribly - like it closes in 3 days!  Painfully embarrassed and being harassed by the paparazzi, Matt goes into hiding at the home of his best friend Aaron.  What he doesn't count on is Aaron's younger sister Vivienne or his attraction to her.  Or the fact that they have a bit of a history that he doesn't remember!
https://www.chasing-romance.com/one-more-kiss

And the series really gets a big of an intro in The Shaughnessy Brothers series in THIS IS OUR SONG.  This is book four in the Shaughnessy series and focuses on Riley Shaughnessy who is the lead singer of the band named after him.  The band goes on hiatus and Riley is trying to put out a solo album.  The only problem is that he has writer's block and seriously doubting himself.  To buy himself a little time with his record label, he agrees to be interviewed by a popular music magazine.  When the beautiful Savannah Daly shows up to interview him, he's not sure which is worse - writer's block or fighting his attraction to the beautiful journalist.
https://www.chasing-romance.com/this-is-our-song