By Alyson McLayne January 16, 2018
Highland Promise, the first book in my series, The Sons Of Gregor MacLeod, is on sale for $1.99 all this week (e-book only)! A great price for hours of time spent with the brawny Darach MacKenzie and the rest of his drool-worthy foster brothers!! 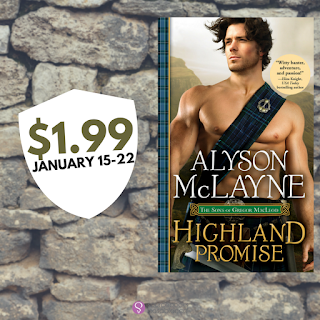 A wee excerpt for you!!

“I’ll not be marrying the lass, Oslow, but if I did, she’d more than likely give me daughters. All of them looking like her, causing trouble. I’d be an old man in my grave before I was forty.”
“Nay. She’d give you sons. Braw lads as strong-minded and fearless as her. But if you’re not interested in the lass, I’ll introduce her to my Angus. He needs a wife, and I’m sure he’d be as smitten with her as Gare and Brodie.”
The blood heated in Darach’s veins, flushing his face. He looked toward the field, trying to make out what Caitlin and the two younger men were doing. Naught of consequence. Just playing with the kittens.
Playing with the kittens—like hell. Brodie was a right rogue with the lasses, and Gare was such a pitiful lad, caught betwixt man and boy, she’d want to save him just like she’d saved the baby bird. Most likely he’d try to make himself look as pathetic as possible with the hopes of ensnaring her, the devil.
Darach stood abruptly and made his way across the rocky shore to the field. Lachlan’s snort followed him. Sure enough, Gare and Brodie sat beside her, hanging on to every word. Scoundrels, both of them. He frowned, and they jumped to their feet. Let Caitlin see who was master and laird here—the most dominant MacKenzie male.
After sending them to Oslow, he sat on the grass beside her. She looked pleased to see him. Maybe now would be the time to tell her the kittens were going to the miller’s. He willed himself to begin, but one of the cats tumbled into his lap and mewed up at him. Bloody fiend.
“Och, would you look at that. He loves you, Darach. Maybe he will be called Justice, for he is drawn to you and you are the most just man I know.”
He puffed up and deflated at the same time. ’Twas a good decision to send the cats to the miller. Not only did it show Justice, but also Prudence, Fortitude, and Temperance. Surely she would see the right of it.
The kit ran up his body and batted his hair. Darach started in surprise. Grabbing it, he held the wee thing in front of him. The cat reached out and swatted his chin.
Caitlin fell sideways onto the grass, laughing. “You’ve ne’er had a cat before, have you?”
Darach grunted and brought the kitten closer. He had to admit it was sweet—big eyes and downy, soft fur. It suckled the stubble of his beard, and his heart turned over.
“They’re starved, poor babies,” she said. “He’s trying to nurse. All we had was water. It helped, but their bellies are empty.”


There would be lots of milk at the miller’s. 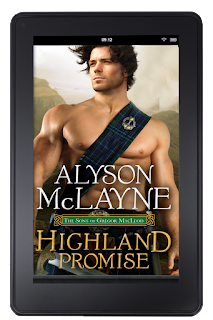 “Caitlin, I doona think…”She gazed at him, her eyes wide, trusting. A happy glow surrounded her, and the words stuck in his throat. Maybe she could keep the kits ’til they were old enough to be on their own. House them in the kitchens and out of his sight and the sight of his dogs for a week or two. Then they could go to the miller.
“Aye, Darach?”
“’Tis naught, lass. We’ll be home soon and they can have their meal.”
Picking up a kitten, she held it close. “I think this little lass will be Temperance, for she’s the only female and needs to have much restraint to live with three brothers. It must be a trial, doona you think?”
“I lived with four brothers, and aye, ’twas a trial.”
A wistful look crossed her face. “I did so wish for a brother. Or a sister. But my parents were not blessed with bairns after me. Instead, I had lots of pets—cats, dogs, horses, and pigs.”
“Pigs?”
“Aye, pigs are wonderful pets. Although I caused such a fankle when my father wanted to butcher the dear thing, I was ne’er allowed to bond with a pig again.”
“And what happened to it?”
“I doona know. I lost more than just my parents the night of the fire. Verily, ’twas a torment. I longed for pets after that, but I feared to show favor to any creature, lest my uncle hurt the animal. I was verra careful when I fed Cloud apples. The guards who followed me knew, I’m sure, but one older guard in particular didn’t mind.” She turned to smile at the stallion tethered with the other horses. “I’m thankful you saved him too.”
His stomach soured at the insight into her life after her parents’ death, at how afraid, alone and sad she must have been. Yet she’d shown none of that to him or his men. And he knew she must have felt it—her heart was as big as the loch.
“I want you to have, Cloud,” he said suddenly. It was the least he could do.
Her eyes grew round. “Truly?”
“Aye. But wait to ride him until we return to the keep. I doona want him to spook and throw you out here. Let him get used to you in the stables first, aye?” Where he could have a healer on hand and spread out some hay to soften her fall.


With an excited holler, she threw her arms around his neck and almost knocked him backward. One arm settled around her waist, the other hovered just above her hair. The devil take him, he wanted to touch her, to hold her still for his kiss. 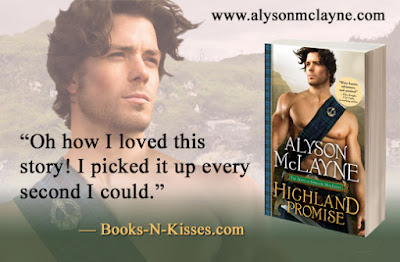