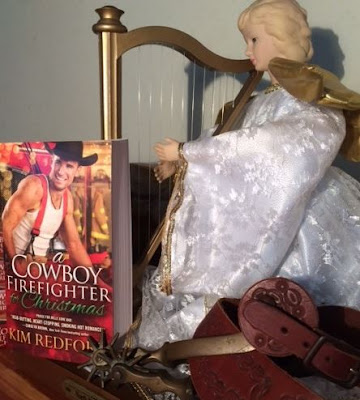 At Christmastime, I’ve long enjoyed setting out a blond-haired angel dressed in a white satin gown holding a golden harp in her hands. “Hark! The Herald Angels Sing” plays while the angel’s arms move up and down as if she’s strumming her harp after I punch a red button on the base. I feature this angel in A Cowboy Firefighter for Christmas, particularly important after Trey dubs Misty his Christmas angel.

Read on for an excerpt from A Cowboy Firefighter for Christmas.

On Wildcat Road, a half-naked man burst out of a pasture and ran onto the two-lane highway. He stopped on the white centerline and waved a bright red shirt back and forth high over his head.

Misty Reynolds slammed on the brakes of her SUV, caught searching for a radio station that wasn’t playing Christmas music.

She gripped the steering wheel with both hands as she screeched to a stop, managing to narrowly avoid hitting the guy. She felt her heart thump hard with the burst of adrenaline and slumped against her seat in relief, grateful she’d been able to stop in time. She forced her breath to a slower, calmer pace.

As the adrenaline rush drained away, and she was able to focus, she got a better look at the stranger and licked her lower lip. This guy was all ripped jeans, cowboy boots, and big belt buckle over buff, bronze, sweaty body. His broad, muscular shoulders tapered to a narrow waist, and his long legs looked as if they belonged straddling a horse. He reminded her of her all-time favorite candy, Texas Millionaires.

It’d been a long time since a man had set her senses on spin cycle. And she’d nearly run him over. She wasn’t sure whether to be annoyed or frightened. She felt a little shaky. Here and now was not a good time or place. Life was shaking her up enough already. She didn’t need this problem.

She was headed toward a wide place in the road called Wildcat Bluff. The Dallas-Fort Worth Metroplex—as in big-city civilization—sprawled a couple of hours south. She had gladly left it and all the Christmas hubbub behind her. She was far away from everything now, except cattle, grass, trees. And the tan­talizing stranger. But what was going on here?

He ran the last few steps to her car, pulled on the door handle, and then hit the window with the flat of his hand. “Help me!” he said in a deep voice muted by the closed windows.

“Do you have a medical emergency?” She held up her phone. “No coverage.”

He frowned, drawing his dark, straight eyebrows together, as he shook his shirt at her. “There’s a grass fire!”

She realized his red shirt was blackened and burned in spots. He’d obviously been using it to beat out a fire.

Only minutes to stop it.” He glanced at her backseat, and his face lit up with happiness. “You’ve got towels!” He dropped his tattered shirt.

“Always. Just in case.” Even as the words left her mouth, panic started to seize control. Breath caught in her throat. Chills turned her cold. And she felt pressure on her chest as if from a great weight. She was terrified of fires. They ranked as even more nightmarish than Christmas, ever since that early morning when she was twelve. She stopped that thought in its tracks. No good ever came from reliving the past. Right now, she had to get out of there before a panic attack overwhelmed her. She threw her car in reverse.

“Stop! I’m Fire-Rescue.” He hit her window with the flat of his hand again.

She was startled out of backing up and transfixed by his intense gaze, pinning her in place.

“If that fire gets loose, it’ll burn across these pastures and kill cattle, horses, and wild animals. Timber will go up fast and furious. Wildcat Bluff won’t stand a chance,” the stranger shouted, pounding his fist on the roof of her car.

She felt his urgent words override her panic. She took a deep breath, then released the locks and opened her door. The scent of burning grass hit her and she reeled back against the seat. She put one hand across her nose to reduce the smell of smoke and another across her chest as if in protection.

Thank you!” He jerked wide the back door. He grabbed three towels and slammed the door shut. “Name’s Trey.”

“Misty,” she mumbled, prepared to do—well, what­ever this hot, strong guy thought she could do. He tossed a blue towel onto her lap, and flashed a quick but genu­ine smile.

“Well, come on then, Misty!” He took off toward the smoke and a break in the fence line.

***
“Fire’s out?” She wanted him to confirm what she saw with her own eyes after they’d beaten back the blaze with her towels.

“Yep. Looks good.” He scuffed his boots across the crusty grass. “Can’t thank you enough. If you hadn’t come along when you did—”

“You’d have thought of something.” She interrupted to keep him from saying another word. His melodic voice with the deep Texas drawl couldn’t help but put her in mind of hot sweaty bodies sliding across cool satin sheets.

“I needed a miracle and prayed for one the minute I saw the fire.” He walked over to her. “I heard my answer in your car coming down the highway. I headed back to the road, running flat out. And there you were in your pure white SUV, looking so cool and unafraid of the wild man pounding on your window. You had a miracle in your car. Towels. Not many people would have had them just waiting on a backseat.”

She didn’t feel so cool and unafraid. Still, his words made her thankful that she’d been able to help. “Like I said, I always do. Just in case.”

He clasped both towels in one hand, and held out the other. “Thank you. You’re my Christmas angel.”

Book #1 in Smokin’ Hot Cowboys
Warm up this Christmas with a sexy cowboy firefighter who knows how to ignite flames as well as put them out...
Trey Duval is a rancher, proud as can be of his Wildcat Ranch. He's also the top volunteer firefighter of Wildcat Bluff, Texas, the town that pulls out all the stops for its Christmas festivities.
City girl Misty Reynolds comes to Wildcat Bluff just in time to help Trey put out a suspicious fire, leading him to dub her his "Christmas angel." Unfortunately, Misty's past has left her with terrible memories of fire, and of Christmastime.
As the two are thrown together again and again, Trey finds himself wanting Misty more and more as they troubleshoot dangerous local Christmas tree fires. Though their trust grows slowly, their passion for each other is burning hot...

What people are saying about A Cowboy Firefighter for Christmas:

"The attraction between Trey and Misty is instant, scorching, and flavored with just a hint of sweet innocence. Add in the distilled essence of a perfect small town, and this tale will melt even the iciest heart."
- Publishers Weekly STARRED Review.

"Redford's novel is a fun, sexy read, one that is perfect for the upcoming holiday season." - RT Book Reviews

"With its vividly written firefighting scenes, rich cast of characters and folksy charm, A Cowboy Firefighter for Christmas will keep you warm and toasty and entertained in a big - and I mean Texas big - way." - USA Today Happily Ever After

"A COWBOY FIREFIGHTER FOR CHRISTMAS is the first book in the Smokin' Hot Cowboys series by the talented storyteller, Kim Redford. This very hot and passionate love story has everything: excitement, hot sex and suspense . . . entertaining and emotional tale that is sure to delight the reader" - Fresh Fiction 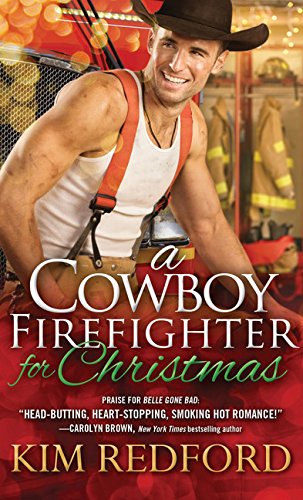 Kim Redford is an acclaimed, bestselling author of Western romance novels. She grew up in Texas with cowboys, cowgirls, horses, cattle, and rodeos for inspiration. She divides her time between homes in Texas and Oklahoma, where she’s a rescue cat wrangler and horseback rider—when she takes a break from her keyboard. Visit her at  Kim Redford.