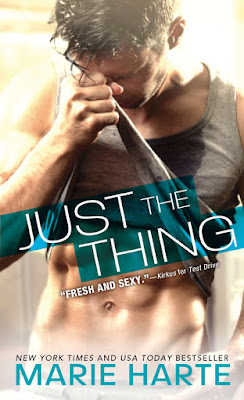 Just in time for July 4th, Independence Day, comes the story of a Marine who's come back to the States, fighting his own battle for freedom.

Gavin's a funny guy. He's got a loving family, friends, and a job where he's valued. But he can't forgive himself for surviving when so many of his friends died. If he doesn't free himself from the burden of guilt and embrace what living means, he'll have nowhere to spiral but down. Zoe lost her sister to a tragic accident, but she's learning to move on. Together, she and Gavin must just be what the other needs to learn that love and forgiveness go hand in hand.

I'm not big on angst. I like a romance that's light and fun and leaves you feeling warm inside. But there are moments when tragedy needs to occur, to stir up conflict and get it churning. Because without it, there can be no peace when past hurts are buried inside. That's my favorite part of this book, watching Gavin grow from a man who hides behind smiles and superficiality to a man who'll risk everything for the woman he loves.

Sigh. A hunky Marine, a tragic past, and a loving family filled with laughter, joy, and occasional tears. JUST THE THING will make you laugh, and at times, it might make you cry. But you'll feel good when you're done reading the book, because hope and a chance at true love make this a romance worth smiling about. :)

As if thinking of opinionated women had conjured her, he saw Zoe by the water fountain near the exit.

She stared at two women chatting and laughing on treadmills, and her face lost all expression. That sadness he’d seen in her eyes on previous occasions showed itself, making her bright blue gaze muddy with emotion. But Zoe didn’t linger. She saw him watching her, scowled, then turned and left.

What would make a vibrant woman like Zoe so sad? Had she lost someone, like he’d lost so many? At the thought, it was as if she’d passed him the baton, letting him take the grief she’d worn so briefly.

The gym started to fade as memory overtook him. The slam of weights like car parts raining down after an explosion. The garble of low voices,the sound of insurgents around a rickety table, plotting, while he stared through his scope and—

No. He didn’t need that. Not here. Not in his safe zone.

He refused to let the anger and pain get a toehold. Instead, calling on the exercises Lee, his new therapist, had shown him, he concentrated his energy elsewhere, on what he was good at. Gavin sought one of the unoccupied treadmills in the corner, the one facing the wall-mounted TV showing a stupid sitcom. He hopped onto the thing and ran. Faster and faster, until his lungs burned and his legs strained. The pain cleansed, allowing him to wheeze in laughter at the televised antics of some brainy scientist-types trying to hit on girls. Much better than raging at all he’d lost.

Balance, he kept telling himself. It’s all about balance.

With that in mind, he once again donned a mantle of false cheer and willed himself to believe life was good. Visualize, and it will come, Lee liked to tell him. Gavin needed to have a discussion with the shrink, because he’d been visualizing Zoe York in nothing more than a smile, but that sure the hell hadn’t happened. Thoughts of her turned his fake cheer into a real grin. He slowed down and let himself enjoy the TV show. But once it ended, he needed something more.

With the help of a spotter, he used a nearby weight bench and lifted until muscle exhaustion. Finally ready to go home and hit the rack. Where he could dream of a stubborn, sexy woman with long, wavy black hair…and sad blue eyes.

Enjoy your 4th of July, and Semper Fi!