Online Dating...Not for the Tinder hearted!

By Juliet Lyons April 12, 2017
Until last summer, I felt like something of a fraud. You see, I’d signed a three-book deal for a series of romance novels based around an internet dating site (albeit a vampire site but when it comes to dating, what 's the diff?) without ever actually trying it for myself. And not because I’m married or in a relationship either—I’ve been happily single for the past few years. Good old fashioned fear held me back.
Whenever a friend broached the subject, (as they often did) I would wrinkle my nose and snort in disgust. Dick pics! I’d say, giving the single greatest excuse for not giving it a go, because really, unless it’s Alexander Skarsgård sending naked selfies, who wants to see any of that business off the bat? 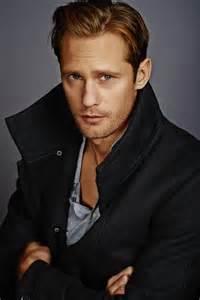 Alexander Skarsgård - whose naked selfies will always be welcome...
In the end, however, worn down by badgering and spurred on by curiosity, I relented. I decided to try it for a few weeks, just to see. I uploaded a couple of pictures that didn’t make me throw up and put myself out there on the app Tinder.
Now, my self-esteem is not so fragile that I think of myself as a troll under a bridge in the looks department, but neither do I have that pouty, Disney eyes thing going on. I was a nineties girl for heaven’s sake—we spent days drinking cheap lager and not washing our hair. We had Kate Moss as our poster girl. We were about fun and friends and listening to Oasis in the park. If you went home more than a few times a week you were a social failure. I didn’t expect anyone to match with me.
But they did. For those not familiar with how Tinder works, pictures pop up randomly and you swipe right to like them and left to reject. Yes, it’s that ruthless and shallow. But soon I was out there with the best of them, gathering matches like a debutante collecting dance cards at a ball.
Perhaps the best thing about Tinder is that it works on your location. If, for example, you go to London on a day trip, it will deliver, directly to your phone all the single men within whichever radius you choose. This adds a whole to new level of potential to trips away. Instead of the one who got away, no one gets away, not without you swiping left on them first. Cupid, your work here is done! You too, Fate! See you around, *evil laugh.
So, what about the guys? What you have to remember is that Tinder, unlike Match or eHarmony, is free and like anything that’s free it attracts all sorts of people—not all of them particularly sane. I had a guy with a foot fetish who wanted to lick my feet (a polite no thanks) and another who was quite open about the fact he was using the app to cheat on his girlfriend (Er–no).
In other words, roll up your sleeves, because if you want to find that buried treasure, you’re going to have to dig deep into the rubbish heap of human nature.
It’s not for everyone and eventually, with writing commitments needing my attention, I deleted the app. But I did meet a couple of nice guys and one I met up with in real life too. He wasn’t the one, but I don’t regret meeting him for a minute.
Who knows? This summer, I may even try it again. All in the name of research of course ;)
DATING THE UNDEAD, Book #1 in the V-Date.com series launches May 2nd 2017.