By ChristyEnglish April 17, 2017
When you're writing a book, a lot of what you think will fit into a novel simply won't, and the scenes that you or your editor can't use in the final draft end up on the cutting room floor, or in the recycling bin. When I wrote HOW TO TRAIN YOUR HIGHLANDER, this happened as it does for every book. Alex and Catherine from HOW TO SEDUCE A SCOT came onto the scene. Since HIGHLANDER was Mary Elizabeth's and Harry's story, we had to cut it, but I've included it here because I loved it. I hope you love it, too.

Catherine has just discovered that Mary Elizabeth is overly fond of the duke, and she is quick to tell her husband all about it. 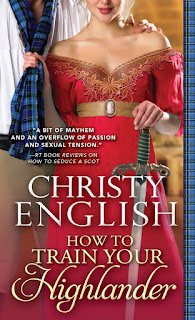 Catherine met her husband in their room, feeling clandestine to be closeted away with him in the middle of the afternoon. Alex, it seemed, had no such qualms, and was already trying to undo the tapes on her gown as soon as she closed the door behind her.

Catherine felt his lips on her throat, caressing the underside of her ear, and she shivered, for that was one of her favorite places on Earth to be kissed. She felt her resolve wavering, but knew that she had to speak up, for Mary Elizabeth’s sake.
”Alex,” she said, this time a little less vehement, and more than a bit breathless. “Mary Elizabeth has been flirting with the duke.”

To her surprise and chagrin, at this revelation, her husband did not pause in his antics. He almost had her bodice open, and her skirt to falling to the floor. That was when she knew that she must rally, or all would be lost, at least for the next half hour. Catherine drew on her fortitude, and stepped away from her husband’s hands.

Alex, for his part, looked as dumbfounded as if she had struck him. She never before turned down his caresses.

“Shall I fetch the leather gloves you love?” he asked.

Catherine felt herself blush at the very thought of that black leather against her skin, though she was a married woman of almost two months. He saw her blush, and smiled, beginning to cross the room to her, even as she tied up her gown.

“I am trying to, leannan. You keep running away.”

“Alex, listen to me.” Catherine hid behind a large armchair, though she knew it was not large enough to hold him off for long. She needed to be quick.

“Mary Elizabeth has been flirting with the Duke of Northumberland.”

For the first time, Alex seemed to hear her. “The Recluse Duke?” he asked. “No one has seen hide nor hair of him since Mary Elizabeth and Robbie arrived two days ago.”

“I saw him not half an hour ago in the portrait gallery.” Alex frowned to hear it, and she went on. “I may have seen the duke, but Mary Elizabeth has been kissing him.”

Alex frowned like thunder then, and straightened his waistcoat. It was Catherine who had to move fast that time, to get between him and the door.

“Alex, don’t go running mad. We’re His Grace’s guests and we must be civil.”

Her husband set her aside, gently, but with determination. “His High and Mighty Worship set civility aside when he kissed my sister.”