Kim Redford Discovers a Bit of Texas in California

By Kim Redford March 24, 2017
One of my favorite tours in Texas is the string of five missions along the San Antonio River. Most people have heard about, or even seen, the Alamo (1718) in downtown San Antonio because of the famous Battle of the Alamo on March 6, 1836. Yet there are another four magnificent missions in the area.

From north (upstream of the San Antonio River) to south (downstream), you can follow the Mission Parkway with fifteen miles of hiking, biking, paddling trails, and culture bus routes. The Park connects Mission Concepcion, Mission San Jose, Mission San Juan, and Mission Espada to the San Antonio Riverwalk through a series of park portals (http://www.lsjunction.com/facts/missions.htm)

When I recently made my way to Southern California, I had San Juan Capistrano on my mind because I knew there was another mission in the area with the same name as the one in Texas. I quickly found the mission famous for its returning swallows in the lovely village of San Juan Capistrano.

Did I compare San Juan Capistrano Texas with the sister mission in California? I couldn’t help doing just that. I even met a lady in the gift shop who was buying—wouldn’t you know it?—a gift for a friend in Dallas. After hearing my Texas accent, she wanted my opinion on her choice. I assured her the present was perfect. And so we parted ways, even as she kept her connection to Texas and I kept mine to California.

I must admit there is definitely more glitz and glamour in the Golden State mission, but San Juan Capistrano sparkles big and bright in the wide open spaces of the Lone Star State. And yet, the missions in Texas and California—even after almost three hundred years—exhibit the same peace, serenity, and beauty deep in their heart of hearts. 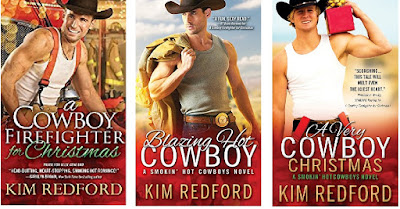 Kim Redford is an acclaimed, bestselling author of Western romance novels. She grew up in Texas with cowboys, cowgirls, horses, cattle, and rodeos for inspiration. She divides her time between homes in Texas and Oklahoma, where she’s a rescue cat wrangler and horseback rider—when she takes a break from her keyboard. Visit her at http://www.kimredford.com.