Enter the Age of the Alpha Heroine

By Vivien Jackson February 21, 2017
In romancelandia, much has been made of alpha heroes and how sexy they are. I’m not denying the sexy. At all. I want to be clear about that. If some amazingly hot Viking prince warlord pack alpha rock star waltzes into my fictional purview, I am not going to tell him to go away. But I also might want to introduce him to my friend, alpha heroine.

And sit back and watch for sparks.

I grew up reading eclectically: Barbara Cartland and J. R. R. Tolkien and Madeleine L’Engle and John le Carre and Dean R. Koontz. Basically whatever I could scrounge at the library and/or neighborhood yard sales on the cheap. And though I salivated over the growly and slightly menacing heroes in some of those swoony ‘80s romance novels, I didn’t want to be any of the heroines.

For the yearning to identify with protagonists who looked like me, I went to … well, I didn’t have a lot of options. L’Engle’s A Wrinkle in Time was a great springboard, but the rest of that series devolved to dude-centric stories later on, and the girls didn’t have much agency. Mostly they served as plot enablers or prizes to be won. 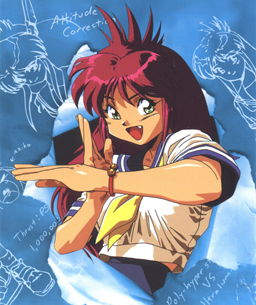 Japanese anime and manga offered a mixed bag, but they were way ahead of the Babysitters Club in terms of girl-power. It was thrilling to see the pigtail-wearing, giggly schoolgirl take out, like, an army of shadow demons with her magical bazooka. My favorite adorable weaponized female was the All-Purpose Cultural Cat-girl Nuku-Nuku.

In the ‘90s some awesome kick-ass heroines carved a river of blood through popular culture: Buffy and Aeryn Sun and Sarah Connor, to name a few. And books started going that way, too. Y.T. and Nell in Neal Stephenson’s Snow Crash and The Diamond Age, respectively, made me punch a heck-yeah into the air a few times.

That was what I needed, as a reader. (Again: not making any of those pretty alpha boys go home. Neo and John Crichton and Spike and Angel can all stay. Also you Jamie Fraser. You can especially stay. Here, sit by me.)

(Eyes down here, mm'kay? Focus for just a few more sentences, and then you can scroll back up. Swears.)

In the end, I guess it was also what I needed as a writer. That spark. That hell-yeah Xena Warrior Princess warble. The Wonder Woman yell!


So, if you don’t mind, I’d like to introduce you to Mari, the alpha heroine in my book, Wanted and Wired (coming April 4, pre-orderable now).

She’s really nice. Unless you hurt her dude. Then she might murderize you. 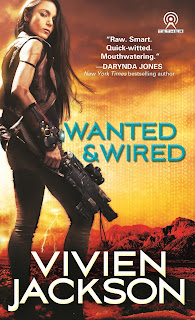 Reviewers can request an advance review copy on NetGalley.

Vivien Jackson writes stories with robots, grenades, pixies, and always, always down-home salacious kissery. She's an unrepentant fangirl of many fandoms and would love to discuss your favorite ships here or here or here.