A Very Jaguar Christmas and What's NEXT!

Demetria  is feeling blue, but she and Tammy, Everett’s sister, get together for drinks and movies, but when one of the ladies drops a glass on the floor, Everett comes over to ensure the two of them are okay. So much for the start of his vacation. But he’s fine with it, as long as it affords him the chance to see Demetria again. Little does he know, the next morning when he gets a call from his mother at her jaguar daycare, their whole jaguar shifter world will change forever and he and Demetria will be given the assignment that will challenge them to the end in A Very Jaguar Christmas.

Excerpt from A Very Jaguar Christmas

He checked again on Demetria, but she hadn’t moved, so he went into the kitchen to begin Operation: Cleanup.
Even though he would have been at home still playing his game and killing the dragons plaguing their world, he was glad to be here as a brother, a friend, and a Golden Claw agent, whose mission was to take care of jaguars in need. Still, he’d never believed he would be serving as a maid.
He was nearly done mopping the floor when he saw something move out of the corner of his eye and turned to look. Demetria was leaning against the wall next to the china cabinet, looking half asleep, her dark hair in curls about her shoulders.
“Are you okay? Do you need something to help settle a hangover?” he asked, continuing to mop the floor.
She snorted. “What are you doing?” Her words were still fuzzy.
“Cleaning up after the party and ensuring Tammy gets to work tomorrow. You don’t want to see Martin when he gets a call that one of his trainers didn’t show up first thing in the morning. Or hear how upset David would be if he learns he had to be out training all night and his mate doesn’t come into work the next morning to teach. She had just…vanished.”
Demetria sighed. “Got it.”
“Why don’t you get some sleep, if you can? I’ll leave first thing in the morning.”
She nodded and turned, and nearly fell.
He sighed, set the mop against the counter, and stalked toward her. She held up her hand to ward him off. “I can do it.”
“Yeah, and you’ll make it by the time I leave in the morning.” He gently scooped her up in his arms, feeling way too much like he was taking her to his bed, and carried her down the hall to the room she indicated was her bedroom, putting her in her own bed. He covered her up, and, well hell, kissed her cheek. Which is what he had wanted to do before they ended their time together last night. Well, kiss her lips, hug her, more.
Her eyes widened a little, he smiled, and said good night. Then he went back to his maid duties.
When he was done, he removed his clothes except for his boxer briefs and stretched out on the couch, covering himself with the afghan, wrapping himself in Demetria’s scent, and thinking this was as close as he might ever get to heaven. 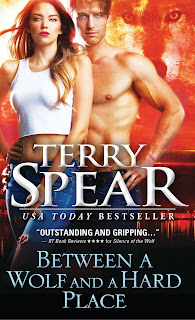 And that's the line up! Are you ready for more hot wolves and jaguars?
More for 2018!