By Marie Harte December 29, 2016
As 2016 wraps up to a close, I want to focus on a few positives. And why not? So here's a kitty pic to get warmed up. This is Rex, sitting in Big Bear's lap. Rex would like to remind you that that are some great things that actually happened this year. 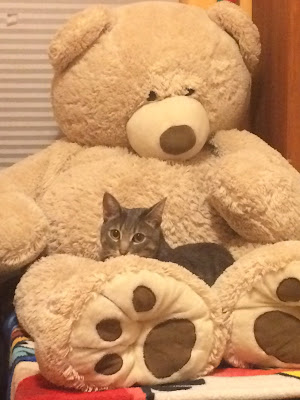 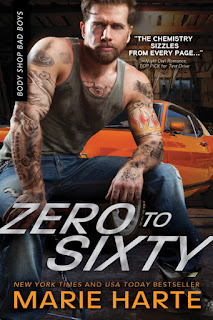 After her last disaster of a relationship, Ivy Stephens is content being single. She has her job, her apartment—and the cute little puppy she’s seen hanging around. When he escapes, she finds her search efforts aided by a big, burly, devastatingly handsome man. One who claims a prior claim on her dog.

Sam Hamilton is at loose ends since his best friend fell in love. He finds a sense of purpose in rescuing strays. The puppy who’s stolen his heart just happens to run into blond, beautiful Ivy. And Sam can’t help hoping she’ll take in one more stray—him—for good.

They walked all around the park and deeper into the West Queen Anne neighborhood. Despite Sam still being a stranger, he seemed on the up and up. He called out for the dog. They walked near each other but not too close. She saw him watching her, but when she’d look at him, he appeared to make an effort to seem nonthreatening. Hands in pockets, keeping his distance.

She found his actions comforting—and charming, oddly enough—because he didn’t seem to be trying to impress her. He’d sworn. Called her a hot chick, and he—

“Sam.” She pointed to a small moving shadow near a house on the corner of 4th and Blaine.

He nodded and raised his voice. “Scruffy. Come.”

The shadow picked its head up and took a step in their direction.

A tiny yip, and then the little guy was bounding toward them. Sam and she crouched low, so as not to threaten with their size. But Cookie didn’t seem to care. He went to Sam first, his tail wagging and his tongue licking everywhere he could reach.

Ivy watched Sam’s stern demeanor melt into a smile that stole her breath. When he wasn’t looking so serious or tough, he was…beautiful. His smile reached his eyes, and the joy on his face was infectious.

She laughed, and Cookie turned to her, half-leaping on her with the enthusiasm of a dog three times his size. “Oof.” She fell on her butt backward but couldn’t stop smiling as she stroked the dirty little dog. “Cookie. Where have you been?”

“I think he likes Cookie better than Scruffy,” Sam said, sounding gruff. His smile had disappeared, but the happiness in his eyes remained, softening him the tiniest bit.

“Sam? Did you want to take him back to his foster family?”

He shook his head. “He’s good with you, I think.” Yet something in the way he petted the dog, the caring way he watched Cookie, told her Sam felt more than just a responsibility to see the puppy settled.

“I might have jumped ahead of myself,” she hated to admit. “I felt bad for him so I took him in at work, because I didn’t want him to be cold. Then somehow I bought him a collar and a leash. Some food. Nights at my house. Now he has a dog bed.” She sighed. “But I haven’t exactly explained him to my landlord yet."

Sam frowned. “Do you want him or not?”

“I do.” She surprised herself with that truth. She hadn’t wanted any relationship entanglements since Max. Including a pet. Yet Cookie was so cute, so desperate to be loved. And she finally felt ready to give that back. “But I have to okay it with my  landlord.” She felt silly for not having been better prepared. “And I’m not ready to take him fulltime, yet. I need to figure out when I can have him and how to care for him. I, well, I didn’t exactly let my boss—I mean, my partner—know about him either.”

Sam studied her. She didn’t know what he saw, but a smirk curled his lips as he helped her to her feet while scooping up the wriggling puppy. “Suckered you into caring for him with those big brown eyes, didn’t he?”

She nodded, all the while being suckered into anything Sam said as she stared into his big gray eyes. Gray-blue, she corrected herself, feeling a sudden connection to the giant man. She put her hand on the dog and somehow found her fingers curled around Sam’s thick biceps as they walked past the park, back toward her car.


Zero to Sixty
by Marie Harte