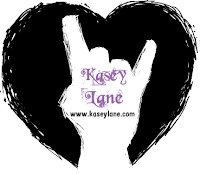 I hope you and your loved ones are having a happy holiday, filled with love and family. I'm going to keep my post short and share with you an exclusive excerpt from my upcoming March release, Beautiful Mess. I finished up this book during a very trying time in my life. Because of that I seem to have an odd attachment to these characters. I hope you like Jax and Jami. If you're interested in their whole story, you can pre-order the book on Amazon (or just about anywhere). My debut (the first in this series), Beautiful Crazy (on sale for $1.88), is out now. For more information on my books or me, please visit my website at KaseyLane.com. 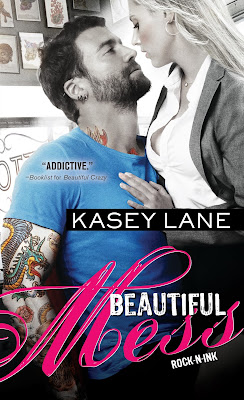 Jackson Paige was, in fact, Jax Pain, the drummer of Manix Curse.

That thing in her chest tightened around her ribs, making it hard to breathe.

This new little development was further complicated by the fact she’d been hired by the band to negotiate their tours, sponsorship, and recording contracts.

As she slowly rinsed her hands in the sink and checked her updo for any out-of-place strands, she pretended it didn’t make a difference. She had a way of doing things—rules, structure, plans—that worked for her now. And Jackson had no place in the calm order of her life. None. He was a blustering tornado that would rip apart anything good and calm she had, leaving behind only more mess. And his effect on her panties had nothing to do with real life. It was something to note and then forget. She took a deep breath, allowing the oxygen to fill her lungs and relax that pinch in her chest.

By the time she found herself striding back down the hall to grab her briefcase from the empty conference room, she’d slowed the pounding of her heart. She could do this. The soup of emotions boiling up from seeing him would go away. It would. She would be okay. She was not a frivolous, impulsive girl easily swayed by tall, muscly tattoo artists, let alone super-hot musicians. She was a damn lawyer. A respected member of the judicial system, a sworn officer of the freaking court.

Jami didn’t like all these messy feelings. She’d gotten used to being in control. She smoothed her jacket down. Her outfit screamed conservative attorney. Or it asserted it politely, but resolutely.

Stepping into the conference room, she looked around for her briefcase. Not on the table. Not on the chairs. Dammit, she was usually more together than this.

She was turning around to go back through the door and see if someone had left it in the reception area when she heard the snick of the door closing. She snapped her head in the sound’s direction, and a very tall, very sexy Jackson stood there, swinging her bag from his hand.

“Looking for this, sunshine?” His smile was wide, but slightly predatory, and his eyes narrowed in challenge. He needed a shave. Well, another man with that amount of scruff would need a shave. Jackson, on the other hand, looked knavish and naughty as heck, with his shadowy stubble and messy hair. Hair that was longer than it had been in school and shorter on the sides, brushing the collar of his gray-striped button-down shirt. The edges of a tattoo—what looked like swirls of blue water—peeked up over his shoulder and across his collarbone, tickling his neck. He had his long sleeves rolled. Color filled his forearms to his wrists, with the tongue of what appeared to be a dragon licking over the top of one hand. The muscles in his corded arms tensed and danced when he shifted her bag.

Why did she find him so damn hot, burning all rational thought from her head with just a glance, just a touch? Why him? She saw guys every day with this same look and never gave them space in her head. There was something in the relaxed but coiled way Jackson held himself that exuded pure sexual charisma. All rock-star charisma.

A rock star that had left her. Without explanation. Without a reason.

“Yes, thank you,” she said tightly, reaching for her bag. He swung it out of her reach, pulling it to his chest.

Without warning, the room whirled as he grabbed her shoulders and spun her. Her back hit the door with a soft thunk and she heard, rather than saw, her bag drop to the floor. She couldn’t move, couldn’t look away from his piercing gaze, which might as well have been a knife, the way it cut her open, exposing her. Heat from his body washed over her, blanketing her skin, overwhelming her. He didn’t touch her anywhere but her shoulders, where his long fingers dug into her flesh, branding her through her jacket and blouse. They stood there staring at each other, her hands at her sides. Then he reached up and drew his index finger down from her ear along her jaw, flinting sparks off her body. Her nipples pulled into hard buds, painful as they ached for his touch. If she wasn’t careful, those sparks were going to start a fire she wouldn’t be able to put out. She couldn’t afford to lose control. Not now and not ever again.

She wanted to close her eyes. Wanted to lean into his touch and let him take her over, like he always had when they were together. But she couldn’t give in.

Not anymore. Not again.

When she moved to speak, he drew his finger over her lips, causing her to gasp. She sucked air into her lungs… air she so badly needed but couldn’t quite get enough of. Big mistake, since his smell—that clean salty scent he always had, like minutes earlier he’d jumped off a surfboard after riding waves—kicked her sense memory in the gonads. And everything she’d been trying to forget about him came flooding back, making it hard to ignore the flutter in her belly.

Jackson shook his head, and an unruly lock of hair fell forward over his eye, lending him a sinister and mischievous look, like the forbidden devil he was. The air between them grew thicker, weighed down by ghosts of the past and a lust that had never gone away.

He leaned down, touching his forehead to hers. “I can’t ignore the thing between us, Jami. Can you?”

Yes. She certainly could and would. But then she did something completely unexpected. Something she hadn’t planned or even considered. Because if she’d thought for even one second, it would have never happened.

She wrapped her hands around the back of his neck and tugged his mouth down on hers. It was a light, sensual brush of her lips against his, but the little flutter she’d felt earlier—barely a blip on the Richter scale—became a full-scale earthquake, threatening to destroy everything. And yet she didn’t care. It wasn’t enough.

All rational thought, all control, all her rules flew out the window, replaced with a dark need she recognized on a visceral level, one she thought she’d obliterated a very long time ago. The mask she affixed firmly every day to keep order in her life fell off the second his mouth met hers. It completely disintegrated as soon as her tongue decided to lick the crease of his lips and turn a seductive taste into a feast. Instantly he took over, and his fire consumed her. Like it always had. It would sear her and then leave her like so much dusty ash on the floor.

A deep, low moan sounded in the room, and Jami’s eyes opened. The groan came from her. No. Not again. This was not how this thing was going down. She was years over Jackson Paige. Years. Over. And now his band was her client, which definitely meant no kissing. Sweet or sexy didn’t matter.

A cold, sharp clarity wrapped itself around her. She pulled away and ducked under his arm, and the separation felt more like a slap than it should have. A look of confusion marred his handsome face for a moment before it was replaced quickly by his don’t-give-a-shit-take-it-or-leave-it grin. Of all his looks, she hated that one the most. Though, at that moment, she was grateful for his cocky response, since it was a reminder of exactly why she shouldn’t be kissing him.

“I disagree. I think we should do it some more,” he said, stepping forward.

She held up her hand, stopping him. “You gave up that right when you left me without an explanation or even a good-bye. Not even a ‘screw you’ so I knew where I stood. Nothing.” She cocked her eyebrows, waiting for something. A response. Some shame. Anything.

But his expression never changed when he swept his hand through his hair. “Fair enough, but let’s not forget you basically just fucked me with your mouth, sunshine. This isn’t over.”

Guilt and desire and anger mingled hot in her throat.

She stopped abruptly when he stalked toward her and leaned down, sending shivers up and down her arms.

Jesus, what was wrong with her?

“No,” he said, close enough she could feel his breath feathering against her cheek. “You’re right about one thing. We do have some unfinished business.”

The half-lie half-truth rolled off her tongue more easily than she’d thought it would. He was a client, and they really shouldn’t mess around. But the other side of that coin was that she really just wanted him to pick her up, hike up her skirt, and pull aside her soaked panties before he plunged his big dick into her over and over again until he gave her what she knew would be the best orgasm she’d had in a very long time.

But that wasn’t going to happen. No matter how badly she wanted him in her bed again, he was no good for her. It had taken her far too long to get over him, and the recovery had almost been as bad as when she’d been a screwed-up teen. In a way, maybe it had been worse.

“That’s where you’re wrong. We aren’t done.” He pressed his face to her throat. Her breath hitched as he ran the bridge of his nose up her neck and bit her earlobe. The surprising nip sent sharp pricks of desire straight to her already aching nipples. He pulled back and chuckled before turning around and glancing over his shoulder.

“That’s where you’re wrong,” she said. “We were done a long time ago. That was your good-bye kiss.”

Something dark flashed in his eyes before he pasted that damn smirk back on his face. “See ya soon, counselor.”

He strode casually out the door and into the empty reception area, leaving her raw and exposed, nerves sparking and jumping like live wires.