By Sourcebooks Casablanca October 13, 2016
Celebrate the holidays with True-Blue Cowboy Christmas, the perfect blend of cowboys and Christmas and the third installment of the Big Sky Cowboys series from Nicole Helm.

We asked Nicole what she was most excited about for the release of True-Blue Cowboy Christmas.


About two and a half years ago, as I was struggling to decide what new idea to work on, a good friend of mine said why not cowboys?

I’d been writing farmers and small town business owners and antique airplane pilots (it’s a thing), but that simple question opened up a world of ideas—including a long abandoned story set in Montana about a man named Thackery.

Now, if you’ve read the Big Sky Cowboy series up to this point, you know there aren’t any Thackerys in the first two book. In fact Mel and Dan (REBEL COWBOY), and Caleb and Delia (OUTLAW COWBOY), were completely new ideas—their characters, their plot lines, their conflicts were slowly born out of that what about cowboys moment. Summer Shaw, the heroine of TRUE-BLUE COWBOY CHRISTMAS appears in both books, and was also one of those new characters. Mostly, I started brand new, and spun a world out of Blue Valley, Montana that I’m very proud of.

But Thack Lane, the hero of TRUE-BLUE COWBOY CHRISTMAS has pieces of a character I’d thought up when I was a teenager. I never wrote more than a few chapters of his story, and other than the fact it was set in Montana, and he had a dead wife, it doesn't share a lot of similarities from that old abandoned attempt at writing, but the seeds of a story I tried to write long ago and couldn’t are there in the man who is struggling to raise his daughter in the grief of his wife’s death.

Possibly, I never finished that old story because I was young and still bounced from idea to idea without ever finishing anything, but it could have also been because Thack was waiting for the right woman. I like to think the latter, if only because I’m a romantic at heart.

Summer and Thack get off to a bumpy start in TRUE-BLUE COWBOY CHRISTMAS, as so many relationships do, but as they begin to work together, get to know each other, and confide in each other, they both find those missing pieces of themselves in each other.

Neither Summer nor Thack has had it easy (which doesn't come to a shock to many of my readers, I know), but writing their journey to HEA in the spirit and magic of Christmas while tying up this series was something truly special.

So, that’s a very long way of saying, what I’m most excited about with the release of TRUE-BLUE COWBOY CHRISTMAS is for readers who’ve laughed and cried along with the Shaws in REBEL COWBOY and OUTLAW COWBOY to find that happily ever after, not just for Summer, but for the Shaws as a whole. Secrets are revealed, amends are made, and love and family are celebrated—like the best Christmases offer us.

If you’ve been reading this series, you can probably guess it isn’t perfect, but I do think it’s satisfying. You get to see Mel and Dan with a baby, Caleb and Delia…well, they’re still fighting, but it’s centered in love and their burgeoning family. You get the answers to Summer’s mysterious past, and you get a Christmas gathering of all the flawed and complicated characters who’ve made up this world and found love—in significant others, in friendship, in family.

I hope you’ll find the ending of the Big Sky Cowboys series as satisfying as it was for me to write it, and that whatever holidays you celebrate, they’ offer you hope and love. 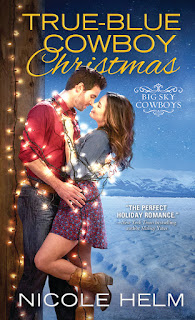 Thack Lane has his hands full. For the past seven years, he’s been struggling to move on from his wife’s tragic death and raise a daughter all by his lonesome. He doesn’t have time for himself, much less a cheerful new neighbor with a smile that can light up the ranch.

With Christmas right around the corner, Summer Shaw is searching for somewhere to belong. When her neighbor’s young daughter takes a shine to her, she is thrilled. But Thack is something else altogether. He’s got walls around his heart that no amount of holiday wishes can scale. Yet as joy comes creeping back to the lonely homestead, Summer and Thack may just find their happily ever after before the last of the Christmas miracles are through…

NICOLE HELM writes down-to-earth contemporary romance specializing in neighbors who don’t live close enough to be a problem. When she’s not writing, she spends her time day dreaming about someday owning a barn. She lives with her husband and two young sons in O’Fallon, Missouri.