Is it All in Your Head?


One of the things I love about writing historical romance is learning tidbits about the past. I’m fascinated by the small things that don’t often make it into history class.
Right now, I'm in the midst of Lord Randolph Gresham's story, the fifth book in my Duke's Sons series. Randolph is the clerical brother, stuck in a parish in the far north of England. But he’s come down to London for the season with the express purpose of finding a wife as lovely as those his brothers have snagged. They made it look easy (kind of), but he finds it isn't. He keeps being distracted by a pert young lady who insists she'd never marry a churchman. Well, who asked her?
Randolph is a bit of an intellectual, and in London he discovers a fad for phrenology – a new “science” that was very popular from about 1810 to 1840. Phrenologists said that the human mind was made up of various faculties, each located in a different area of the brain. They theorized that individual skulls must reflect the relative strength of these traits, like a glove on the hand. 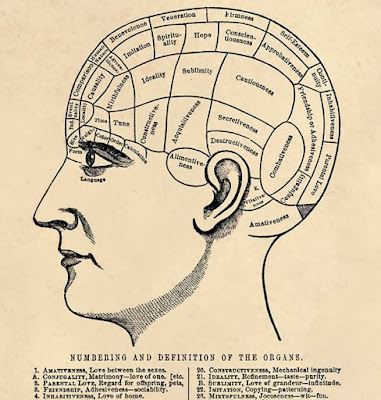 Since this was the case, said the phrenologists, a person's character and temperament could be determined by mapping the shape of his or her head. If you had a strong tendency toward benevolence, for example, that area would be enlarged – a “bump.” If you lacked some trait, like self-esteem, there would be a valley.
In their sessions, phrenologists ran their fingertips and palms over the skulls of their patients to feel for these enlargements or indentations. The absolute and relative geography of each head made a map of character. 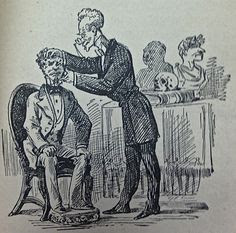 I could see plenty of potential for funny scenes there. And if someone really believed that head shape was destiny? Where might that take the story? I wanted to find out!
Although phrenology had some basis in reality – certain functions are in fact located in specific parts of the brain – it’s now regarded as a pseudoscience. I don’t know about you, but I’m relieved that the shape of my head doesn’t reveal all my propensities to the world.
Jane Ashford