Cover Reveal: How To Train Your Highlander

By ChristyEnglish October 17, 2016
It has been a long time in coming...after years of writing and editing, the third novel in my Broadswords and Ballrooms series is finally coming into the world this December. And the lovely artists at Sourcebooks have the cover. 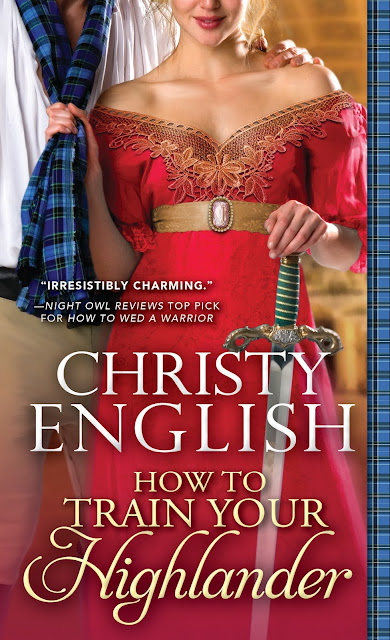 At long last, Mary Elizabeth meets her match in the handsome and reclusive Harry, Duke of Northumberland and faces her mother who banished her from her home. Mary Elizabeth rides a untamed stallion bared-backed, interferes with a fox hunt, and generally makes Harry chase her down at every turn. If he wants her, he has to catch her, but Harry Percy is up for the challenge. Read a preview below as well as a description of the last installment of my Highland adventures among the English ton.

She’s the Hellion of Hyde Park…

A foolproof plan to avoid marriage:
1. Always carry at least three blades.
2. Ride circles around any man.
3. Never get caught in a handsome duke’s arms.

Wild Highlander Mary Elizabeth Waters is living on borrowed time. She’s managed to dodge the marriage banns up to now, but even Englishmen can only be put off for so long…and there’s one in particular who has her in his sights.
Harold Percy, Duke of Northumberland, is enchanted by the beautiful hellion who outrides every man on his estate and dances Scottish reels while the ton looks on in horror. The more he sees Mary, the more he knows he has to have her, tradition and good sense be damned. But what’s a powerful man to do when the Highland spitfire of his dreams has no desire to be tamed...

A bit from HOW TO TRAIN YOUR HIGHLANDER:


Harry—Harold Charles Percy, Duke of Northumberland—was not a man to listen to gossip, especially gossip that found its way so far North, but he knew as he watched his mother’s guests climb out of his own carriage from Town that barbarians were upon them.

He wondered to himself which of the girls was the famous Hellion of Hyde Park, the young lady who had wrestled with the Earl of Grathton in the grass and who had almost cut the man in two with a great steel blade. Neither of the women in view looked capable of such violence, and Harry was about to remove himself and hide among the horses in the stable until it was safe to go back to his work in the garden again when he caught the eye of the slight blonde girl with a voice like a siren’s call.

The girl was a mere slip of a thing, but she was well-rounded, which suited his taste. Harry knew he was a cad for noticing that, but he dismissed his own scruples for the moment; he would take himself to task later for his irreverence toward a lady. As it was, he simply stared at her, taking in the maple brown of her eyes—staring so long that he soon found that her pupils were rimmed with a bit of green.

He had seen many women in his thirty years, but there was something about this one that fair took his breath away.

He stood, staring still, trying to discern what it was about her that held him, as her governess—a lady doing a terrible job of hiding her good looks behind an ugly gown, oversized spectacles, and a lace cap—shuffled his prize off into the house.

Harry made it his life’s mission to avoid all women of good birth save for the occasional merry widow. All women born in the British Isles, some in the Americas, and more than a few in farthest India wanted to marry a duke. And he, God help him, had held that title for the last five years.
But as he watched the little blonde go, he knew that he would make certain to see her again. Surely he might prevail upon her to speak with him without revealing who he was. He did not like the thought of her knowing his title and curbing her intriguing tongue. He wanted to enjoy frank speech with her for just a while longer.

Being a duke must hold some privileges, after all, or what was an august title for?

The large barbarian man who had left the carriage behind the women stepped forward then, placing a gold sovereign in his hand. The Highland Scot handed one to the footman standing by as well, and Harry watched as Charlie slipped the barbarian’s coin into his pocket without a blink.
Harry fingered his own sovereign, trying to remember the last time he had actually held money in his hand. He had an army of stewards and lawyers who dealt with his funds. If he needed something, he asked for it, and it was brought to him forthwith. Money was not something that figured heavily in the daily life of a duke. He raised the coin to the light and watched it gleam in the slanting sun. There was something about the gleam that pleased him. Harry suddenly wished he had earned it.
Before the Highlander could speak to tell him what the coin was for, the lovely woman dressed as a dowd came to his side. She spoke not to Harry, as anyone sane might have done, but addressed herself to the Scot. The two continued their conversation as if Harry were a deaf and blind mule who had simply wandered into the yard.

Harry stood in silence, listening to their conversation, staring beyond them to the house, where the little blonde had gone. He felt a bizarre and almost overwhelming desire to present himself at tea, and to eat scones among these people who clearly had no idea who he was.

The Scot and his lady bantered on, as if Harry was not even there.

“The duchess pays her own people. It is not for us to pay them twice,” the lovely woman said.
“Northumberland is close enough to the border for these people to know the value of a pound,” the Scot answered her. “If a man, even a Lowlander, is given a piece of gold, he takes it and says thank you.”

The barbarian turned to Harry expectantly. Harry swallowed a smile, for dukes did not smile in company, even among those who did not realize that they were addressing a duke. He pocketed the sovereign.

He did not bother with the stables, but went straight to the garden, hoping that some time with his roses might chase the sight of the little blonde from his mind, but it only reminded him of the scent of flowers on her skin. He had taken in a bit of it when she had stood close and handed him her bag.

He pushed the girl from his mind, but her scent would not leave him. His mother might have gathered a house party to marry him off. He might, God help him, have to marry one of the ladies on offer. But the party did not start for three more days. He had three more days to live his life in peace and bucolic harmony. He was not going to let even one moment of those three days of peace go to waste, for they might be the only peace he ever had again.

Harry took up the shovel Martin had left for him and went at the bush that needed transplanting along the eastern wall. He got his hands in good solid earth, but still he could smell blooms warmed not by sun but by skin, and he could see the little blonde standing before him, her leather satchel in her hand.

Ever since Christy English picked up a fake sword in stage combat class at the age of fourteen, she has lived vicariously through the sword-wielding women of her imagination. A banker by day and a writer by night, she loves to eat chocolate, drink too many soft drinks, and walk the mountain trails of her home in North Carolina.