By Samantha Chase August 31, 2016
So several months ago, fellow Sourcebooks Casablanca author Sara Humphreys came up with this idea of the two of us going on a road trip to promote our new books - Always My Girl and Trouble Walks In.  Both books are contemporary romances that have a friends-to-lovers trope and really, it sounded like fun.  So I was on board immediately and we had to come up with a plan to convince Sourcebooks to back us on it.

This is the original design I did to introduce the idea to them: 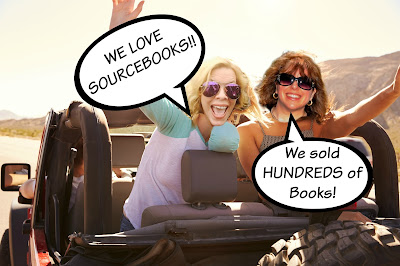 And this is what the professionals put together for us.

Let's just say that I have no future in graphic design. 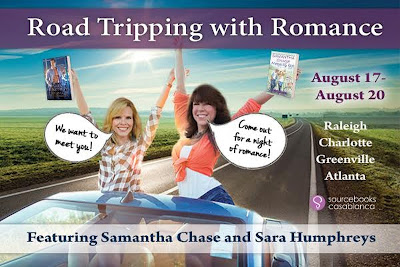 We worked up a plan and set the dates and on August 16th, Sara arrived here in North Carolina (where I live) and we kicked off our tour.

Our first stop was at Page 158 Books in Wake Forest where we did a Q&A with readers and our hosts were amazing - there was a chocolate fountain and fresh fruit and then afterwards, one of the ladies who was there - who owns a candy store - invited us over to the candy shop to get truffles.

I believe my face in this picture says it all. 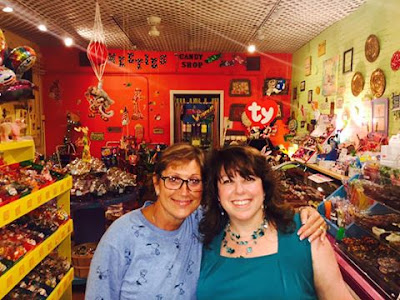 It wasn't all about the candy.  Sort of.

The next night we were in Raleigh, NC, at the Barnes & Noble at Brier Creek and had a great turnout.  One of the local book clubs came and they were so much fun!  Sara and I took turns reading excerpts from our books - something I've never done because I hate reading out loud - but everyone seemed to enjoy it. 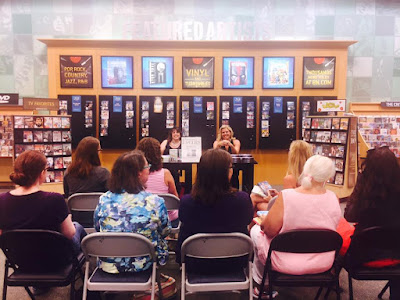 We also incorporated stops that had to do with our heroes.

In Always My Girl, my hero - Quinn Shaughnessy - is a former NASCAR driver.  So of course, we stopped at the Charlotte Motor Speedway here in NC and did the tour.  Now I'll admit, his history was really just a quick mention in the book so I didn't do any research on the racing industry but had I needed it, this was definitely the place to go!  We had a GREAT time!  We ate lunch at the club which had an amazing view of the track and then we got on the tour van and drove all around the complex (there are multiple tracks) and we did 80 mph on the drag strip (max speeds are usually around 300 mph) and then drove on the NASCAR track and did the 24 degree turns (which makes you feel like you're going to tip over in the 15 passenger van!  It was so informative and even if you're not a race fan, it's interesting.  We took pictures in the winner's circle and toured the press box and the executive suites...if you're ever in Charlotte, NC, you should totally go! 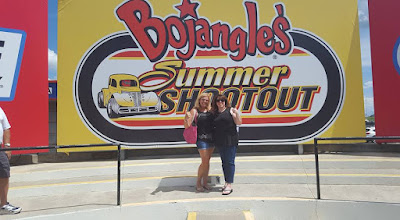 That night we signed at Park Roads Books (an indie bookstore in Charlotte, NC) and got to meet some super nice readers! It was a smaller event than the previous night, but that didn't stop us from having fun. 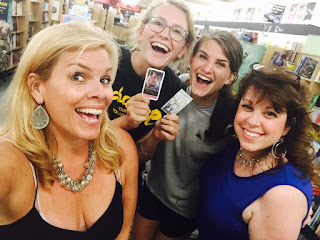 Next stop was Greenville, SC, and we started the day at a K-9 training facility because Sara's hero in Trouble Walks In, is a K-9 cop.  Sara did a Facebook Live video while interviewing three different officers (who were incredibly gracious and sweet) and while I was loving being there, I was dealing with my own K-9 issue at home in the form of a 16 year old boy who wouldn't wake up and let the dog out.  My sweet little Maylene was still in her kennel when she should have been up and out!  We got it worked out but I was watching the training examples from a distance.  At the end, we gave the officers copies of our books to say thank you. 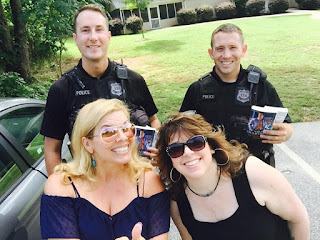 Are we a riot or what?

The signing that night was at Fiction Addiction in Greenville and we had a small group of ladies come out - including a mother/daughter (I love seeing that!) - and we answered questions and just chatted and it was nice to get that one-on-one time with readers.  Plus we had an amazing dinner beforehand - I introduced Sara to the wonders of BBQ in the South. 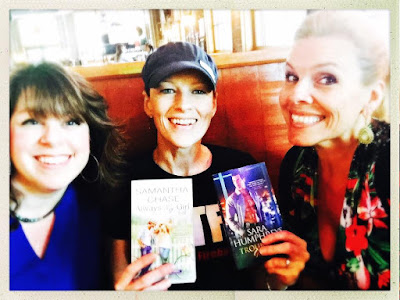 Our last stop was in Newnan, GA, at the Barnes & Noble at Ashley Park.  So many amazing shops there that I was almost distracted by it all.  We had readers waiting at the table for us when we arrived and we had a steady flow of people stopping by all day.  No Q&A here.  It was strictly a table for us to sign books and it was fun people watching as they all came and went throughout the afternoon. 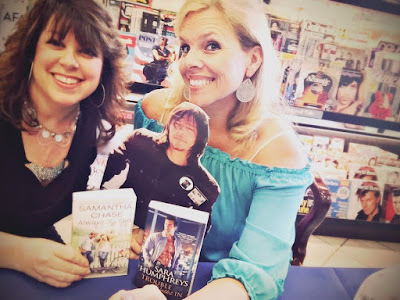 Once we were done signing, we grabbed Flat Norman - Sara's traveling companion - and took him to his people.  Or should I say we took him to Senoia where they film The Walking Dead.  He owns a restaurant there called Nic & Norman's and we went there for dinner and let me say this - if you're ever in Senoia, GA, GO THERE.  I don't watch The Walking Dead so I wasn't sure what to expect but it's not a restaurant themed for the show.  It's just an amazing place to eat with great food, amazing service and an awesome atmosphere. 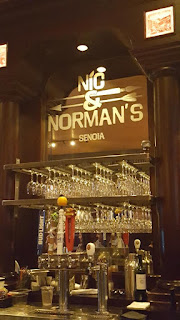 We had a bit of a wait so we sat at the bar and had a drink to celebrate our successful tour and we were talking with the manager and seriously, she was the nicest person ever.  We ate crab cakes while we waited for our table and had everyone laughing at our antics and Sara's story of why she was carrying around Flat Norman.

The short version?  She interviewed Norman Reedus about his show "Ride" and he offered her a ride on his motorcycle.  And since that didn't seem like it was ever going to happen, she made a Flat Norman and took him for a ride on our road trip.  Everyone loved it and got a kick out of it and honestly, they entire staff could not have been nicer.  Our dinner was awesome, we were treated like rock stars and then we almost OD'd on dessert. 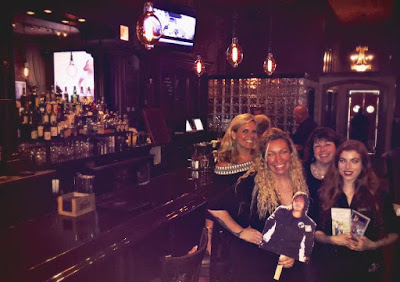 We gave books to our waitress - Cedar (how cute is that name?) - and to the manager Jessica.  Seriously, this place was amazing. 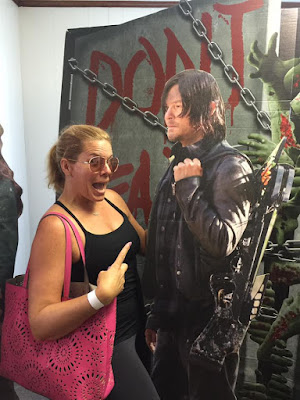 Sunday was our day to fly home BUT...we did stop and do a Walking Dead Walking Tour first.

It was a two-hour tour around the town to see where they shoot a lot of the show and even though there were no celebrities around - and I had no idea what our guide was talking about like ever - look how happy my girl was!  A great ending to a great trip and we are seriously hoping that Sourcebooks lets us do it again in the Spring!  I'm thinking the Northeast this time!