Today is the 127th anniversary of Maria Mitchell’s death. Mitchell (1818-1889) was the first American woman to work as a professional astronomer. Her life would make a fine (fictionalized) biography for a feisty intelligent heroine.
Born in Nantucket, Massachusetts, Mitchell was a first cousin four times removed of Benjamin Franklin. Her Quaker community was unusual for its time in insisting on the same quality of education for girls and boys. She attended local schools, and her father taught her astronomy using his personal telescope. She opened her own school in 1835 and allowed non-white children to attend, a controversial move as the local public school was still segregated.
Using a telescope, she discovered "Miss Mitchell's Comet" on October 1, 1847, winning a prize established some years previously by King Frederick VI of Denmark for comet spotters. Mitchell became the first female Fellow of the American Academy of Arts and Sciences and the American Association for the Advancement of Science. She was named Professor of Astronomy at the new Vassar College in 1865. After teaching there for some time, she learned that despite her reputation and experience, her salary was less than that of many younger male professors. She insisted on a salary increase, and got it. (Go Maria!) The Maria Mitchell Observatory on Nantucket is named for her.
Now we just need a worthy hero to match. 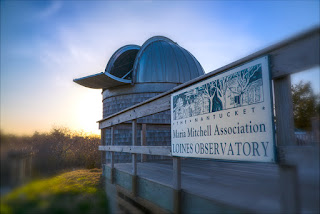