Who doesn't love the 4th!

Well, okay, the bad, bad aliens in Independence Day for one. And maybe, just maybe they blew up the White House before being destroyed, but as I said, bad, bad aliens.


And after all, they were trounced so thoroughly that it took them 20 years to come back for a sequel (which we'd like to think was a record for Hollywood, but sadly it isn't even close. I just saw the trailer for the remake of The Magnificent Seven...which I can't wait to see.)

Of course it is hard to complain about Hollywood filming in series when I write in series. Especially when I have so much fun doing it! I counted today and in my Night Stalkers series alone, there are four main series and a couple of minor ones.

Behind the scenes of the most dangerous helicopter regiment in any army, lies a political machine centered on the White House. And the denizens there are no more safe from falling in love than the pilots I've sent soaring into the skies.

For this July 4th holiday, I'm celebrating with:


But when Roy is assigned to be the head of her protection detail, neither of them can resist. 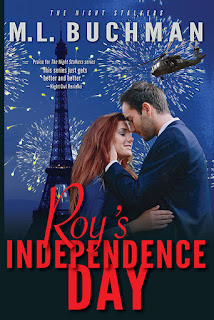 “Check out this. Southwest Gate.”

By the tone over his radio headset, there was no question what Roy was being asked to check out. Not some depressed loon looking for “suicide by cop” achieved by jumping the fence. Nor some a-hole who thought he could actually cover the seventy yards between the fence and the White House without tripping a dozen alarms and alerting the ground teams.

Secret Service officer Roy Beaumont swung his sniper rifle around until he could see the Southwest Gate. He had the broadest field-of-view of the grounds from his perch on the roof of the Residence.

Hank lay on the East Wing roof and wouldn’t see squat, which would totally bum him out.

Fernando’s post on the West Wing roof had prime sightlines to the Southwest Gate.

Mike was on the other side of the roof facing Pennsylvania Avenue and Lafayette Square and couldn’t see this direction at all. Mike’s was the most boring post because idiots always came across the wide South Lawn, rather than bolting for the short crossing to the North Portico, probably because of the attraction of the Oval Office overlooking the South Lawn.

As Secret Service counter snipers, they were set up for overlapping fields of surveillance and fire. They provided overwatch protection for the ground security teams, but their primary duty was to monitor the distant stretches of D.C. in search of threats. Any decent sniper could attack from a half mile away, a good one from a full mile or more. The shot could be taken from a hotel window or a parked van. It was the counter sniper’s job to find them before they found the White House.

And on the incredibly long, boring watches, they also had overlapping views of any distraction. Sometimes it was a cute kid with a balloon out on The Ellipse (and it never hurt that cute kids often had cute moms in tow). Or a gaggle of dumb-ass protestors whining about something the Secret Service snipers couldn’t even figure out from their signs—they really needed better PIOs, Public Information Officers. It could even be a cool car, though after a while it took a lot to be cool. By the fortieth or fiftieth Ferrari to swing past the White House even that sweet ride began to pale. Only one thing didn’t.

Roy spotted her through his open left eye and let instinct guide the rifle scope to her face so that he could see her with his right eye. No question who Fernando was on about, just the way the woman walked was something special.

Monday morning on the last day of June had dawned beneath a brilliantly blue sky which left Washington D.C. sparkling. By midday it would be cooking his brains lying out on the roof on overwatch, but for the moment the day felt fresh and alive.

And the woman walking up from the Southwest security gate embodied life. There was a spring in her step. She wore professional clothes, which at the White House seemed to be synonymous with damned dull, but even they couldn’t hide this woman. A shock of dark red hair, which  gathered fire-gold highlights from the summer sunlight, framed her fair complexion. Her shape was very nice indeed and even professional clothes couldn’t hide her overall fitness. He scanned down. Good legs wrapped in sheer hose, runner’s or cycler’s legs. Despite the youth of her face, hers wasn’t the wild energy of some teen or twenty; this was a woman grown and powerful, and she absolutely knew it.

“Told ya,” Fernando sounded very pleased, as he should. This woman was prime material.

“Shit, man. Can’t see a thing from here.” Hank was definitely missing out.

Suddenly the woman was gone from the scope. She’d jinked sideways out of his view fast enough to mistrack even his sniper instincts.

Roy scanned the sidewalk, but he saw no cause such as someone else in her way or an unexpected mountain lion on the South Lawn. He re-centered on her face.

This time she was looking right at him with brown eyes beneath strong brows and she looked eight kinds of pissed. She gave him the finger, then disappeared out of sight into the West Executive Avenue entrance to the West Wing.

He laughed. Not one in a thousand noticed the snipers lying on the White House roof—though they were always there if the President or First Lady was in residence. If either of them came out, whether to walk the gardens or to cross to Marine One, a full SWAT team would be up here as well. No planned movement today, so it was just the snipers and the sky. The few people who picked out the counter snipers typically cowered down and scuttled a bit. Not this one.

Attitude. A hot redhead with attitude. A seriously fine start to a long summer watch.

“Enjoying something about the view, Agent Beaumont?”

Any warmth of the morning drained out of Roy as he rolled over to look up at the speaker. How six-two of barrel-chested, bad-ass senior agent moved so quietly was a constant mystery to all of the counter snipers. Dressed in a charcoal gray three-piece, the head of the Presidential Protection Detail looked completely out of place on the White House roof and yet there was no question that he absolutely ruled the roost.


Hope you enjoy the romp of Roy's Independence Day.