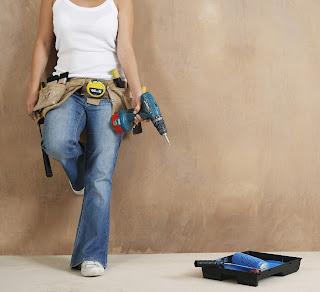 I confess, I have a problem.  It started innocently enough.  Last December I had a bad cold and spent a week in bed.  Flipping channels I came across HGTV and watched my first home improvement show.  It was amusing. It was fun.

At first I would just watch a little Fixer Upper, you know, just for fun. Then it was Property Brothers, Love It or Leave It, Flip or Flop, and before I knew it I was watching YouTube videos on how to tile a shower at 2am.

The worst part was the discontent I now felt towards my own home. Was that peeling linoleum on the floor? Peach tile in the bathroom? And (horror of horrors) laminate counters in the kitchen? Gasp!

After a few months I became convinced that not only did my entire house need to be refinished, but that I could remodel my house with nothing but a charge card and my how to videos. Oh yes, I was going to be a Do-It-Yourselfer!

I thought I would start easy. I would replace a door. How hard could it be? I see them do it on the home improvement shows in about 30 seconds. I managed to rip out my old door with a crow bar (that part was fun).  Then I attempted to install the new door with my level, a pneumatic nail gun, and one million shims.

After my near-death experience with the attack door and the nail gun gone mad, I have decided to call a contractor.  Suffice to say, my home improvement addiction has cost me plenty.  My husband has made futile attempts at banning me from watching home remodel programs.  He is convinced every show costs him money.

But oh, I need me some shiplap and a French door!

Has anyone else been bitten by the home improvement bug?