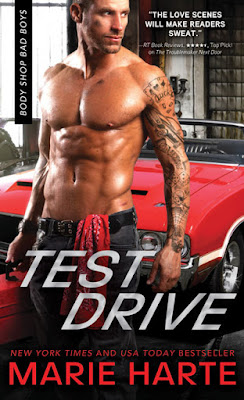 Since I'm posting this the night before my trip to Las Vegas, my mind is on flashy, shiny things. Thus...Johnny. *smile*  Johnny Devlin is the hero in Test Drive, book one of the Body Shop Bad Boys series coming to you in less than three more months!  June 7th, to be precise.

GET TO KNOW THE BODY SHOP BAD BOYS
Johnny, Foley, Sam, and Lou are the rough and tumble mechanics of Webster's Garage. These reformed bad boys are used to living fast, but it's the women in their lives who take them from zero to sixty in a heartbeat.

Here's a teaser for you... Johnny and Lara accidentally meeting up for a run in the rain. Enjoy!

They ran in silence for a while, until Lara saw the end in sight. Then she put on a burst of speed and left Johnny behind. When he caught up to her, he had a smug grin on his face.
“What are you smiling at? I won.” She bent over to catch her breath.
“I’m thinking I’m the real winner here. I got to watch you from behind.” He whistled. “You have the finest form.”
“Shut up.” Her face heated.
“So about this jealous thing you have going on with Del and her man…”
“Where do you get your ideas?” She straightened and poked him in the chest, now as wet as he was. What a typical Seattle day. “I’m thrilled Del found a good guy. Mike is perfect for her. As a matter of fact, I was thinking of all the losers my sister has dated and married and wondered if she’ll ever find a good guy.”
“Oh, sure.”
Oddly, he looked…relieved?
“Were you invited to the wedding?” A pause as she twisted the knife. “Or is there a restraining order banning you from a church? You know, considering it’s a holy place and all.”
He laughed and tugged her wet ponytail. “Funny and sexy. The walls might shake, but I think I have heaven snowed. They’ll let me in before they realize I don’t belong there.”
“Ha. You said it.”
He leaned closer, and she froze. “But I’m thinking you don’t belong there either. For someone so damn pretty and sweet, there’s a part of you that wants what I can give you.” His breath whispered over her lips, and man oh man, her entire body felt like one giant exposed nerve. “A run for your money.”
Then he slid a finger over her chin and up her cheek. “So damn pretty.” He blew out a breath and moved back, turned on his heel, and took off in the rain.
Drenched, aroused, and annoyed she’d lost a grip on herself dealing with Johnny, she stalked to her car, not surprised when it failed to start.
The words she said would have filled Del’s swear jar to the brim.
A knock on the window startled her, and she turned to see Johnny.
Rolling down the window, because of course she had nothing as fancy as automatic anything in her car, she barked, “What?”
“Need a jump?” he asked in the politest voice.
“Yeah, I do.”
“You need a jump,” he reiterated, trying to hold back a grin.
She swore under her breath. “Just do it, okay?”
He walked away snickering, but he did help her with the car, then refused to accept any mention of payment.
“All in the line of duty, ma’am.” He bowed, completely soaked.
She forced herself not to notice how impressive he looked in his clingy jogging shorts. “Still trying to get into heaven, eh?”
He winked. “You know it. See you next week at Ray’s.”
Not if I see you first. She drove off. Oh, who am I kidding? That man is catnip, and I’m a scraggly mouser. Time to talk to Kristin and be put off men again…forever.