By Asa Maria Bradley January 20, 2016
Since my Viking Warriors series is contemporary paranormal, I spend more time reading about Norse mythology than history. Although when you study Vikings, the two are very much linked. And it was because of the enthusiasm of one of my history teachers that I first became so interested in my Norse forefather explorers and their gods and goddesses.

I grew up in the very southern part of Sweden and history lessons were a little problematic for my school teachers. If they went by the standard curriculum, we’d be studying all the kings of Sweden and the various wars they fought. However, the southernmost tip of Sweden was actually Danish until 1658 when it changed hands according to the Treaty of Roskilde. The people where a bit reluctant to change nationality and organized an uprising against the Swedish militia. It wasn’t until 1720 that things settled down and Skåne province (Scania) finally flew the blue and yellow flag.

The one thing my history teachers could agree on though was that way before the people in Scandinavia were divided into the three kingdoms of Norway, Sweden, and Denmark, the first major city of the region was Birka. Established in the middle of the 8th century on an island just outside contemporary Stockholm, it was an important trade and cultural center. Goods from Scandinavia, Central and Eastern Europe, as well as the Orient were bought and sold in Birka. It was also the site of the first known Christian congregation in Sweden. It’s a UNESCO World Heritage Site and daily guided tours introduce visitors to the Viking era through reconstructed buildings and boats.

But now the Swedish history books may have to be rewritten. It turns out that Birka was not the first major trading post in the region. In 1934, a farm was built close to Uppåkra Church just outside Lund in Skåne. While digging to create the foundation, the farmer discovered what turned out to be a Bronze to Iron Age settlement. It was obvious to archaeologists that Uppåkra was a major find, but the sheer size of the project seemed to be too much to take on. The funds to create a proper archaeological site didn’t become available until the 1990s. At that point, archaeologists extended the site and introduced metal detectors in the search. They discovered close to 30 000 gold, silver, and bronze objects.

I visited the site last summer and was fascinated to watch scientists sift through layers of dirt that covers buildings, surgical instruments, pottery, jewelry, coins, and bones left behind by the people and animals who lived here since 100 AD. As you can imagine, even though serious digging has progressed for twenty five years now, only a very small part of the total find has been revealed.
One of the finds I find particularly interesting is an unusual building. It’s much taller than dwellings revealed at other Viking settlements and the amount of weapons, jewelry, and small statues buried inside shows that it may have been a house of worship where people gave offerings to the gods. It’s the earliest example of such a house that has been discovered. Another rich finding is the amount of surgical instruments found at Uppåkra, giving new insights into the medical knowledge of people of the Iron Age. 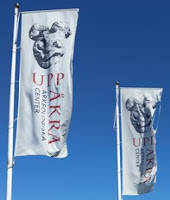 The very best part about Uppåkra Archaeological Center is that it is located ten minutes outside the town where my mom lives. That means I’ll have plenty of opportunity to revisit and see new fascinating historical discoveries come to light as the archaeologists slowly sifts through the dirt, millimeter by millimeter.

For more information about the treasures of Uppåkra, visit www.uppakra.se or check out the center’s Facebook page.